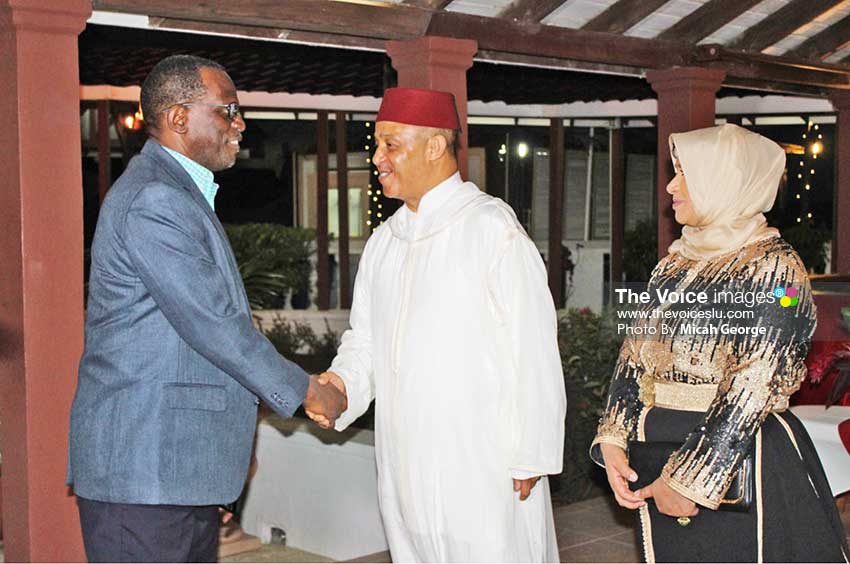 MONDAY of this week was a momentous occasion for the Kingdom of Morocco as its people celebrated the 19th Anniversary of the Accession to the Throne of His Majesty King Mohammed.

That celebration extended to St. Lucia where the Ambassador of the Kingdom of Morocco His Excellency AbderrahimKadmiri and his wife held a reception at the Royal Rex Resort, Reduit Avenue, Rodney Bay to mark the occasion.

Gathered to celebrate with the Ambassador were Governor General Sir Neville Cenac and Lady Cenac, government ministers, the Leader of the Opposition Philip J Pierre, the Hierarchy of the police force, members of the diplomatic corp, invited friends and others.

But it was not all merriment. It was also a time for Ambassador Abderrahim to remind St. Lucia of his country’s role in the international community and its strong commitment to promoting stability and security, human development, economic growth and democracy throughout the Middle East and Africa.

He made it clear that in Morocco returning to the African family last year that Morocco aimed to keep its commitment to Africa and to strengthen its involvement in all matters it feels strongly about.

Ambassador Abderrahim also spoke on his country aligning itself to the United Nation’s agenda on immigration and other fields of cooperation, including South/South cooperation.

He brought his distinguished audience up to speed on Morocco’s friendship with the English speaking Caribbean and in particular St. Lucia where the friendship between the two countries has always been solid.

Aside from pointing out the financial assistance Morocco gave to two countries hit by hurricanes last year, Ambassador Abderrahim noted the deep friendship that existed between his country and St. Lucia that has expanded to Morocco assisting St. Lucia in various fields like education and agriculture for example.

In fact it was noted at the reception that Morocco ships 200 tons, an equivalent of 4000 bags, of fertilizers to St. Lucia per year and that Moroccan experts in agriculture frequent St. Lucia to share their knowledge.

Next year the friendship between the two countries could only deepen or enter another level of cooperation as Ambassador Abderrahim explained that a number of work visits have been planned, a focus would be on capacity programmes and sharing knowledge and Moroccan expertise.

Then there is St. Lucia set to open an embassy in Morocco in September, further proof of the tight friendship that exist between the two countries.

A delighted Ambassador Abderrahim said he looks forward to even more successful interactions between his country and St. Lucia in the times ahead.

Sir Neville did say a few words at the reception but only to reminisce of his time connecting with Morocco as Foreign Minister back in the late 1980s. As always he took time to remind all present that St. Lucia is not just a beautiful small island but the “most beautiful island in the world that I sometimes think came straight out of heaven.”