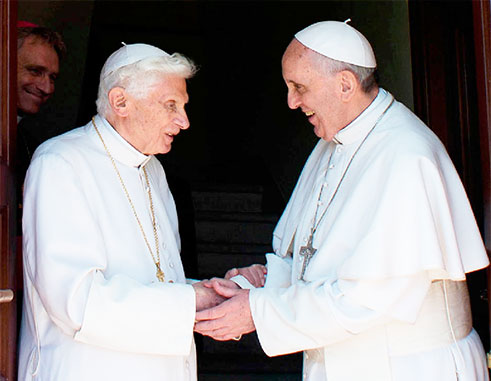 SO called “conservative Catholics” in all likelihood had their hopes dashed last week, as the revelation of the “censored” part of Benedict XVI’s letter to Dario Vigano, the Vatican prefect of the Secretariat for Communication, turned out to be a big “nothing burger.”

As reported in Yahoo News, Benedict XVI was asked to write a commentary on “a new Vatican-published compilation of books about Francis’ theological and philosophical background that was released to mark his fifth anniversary as pope.”

In the previously mentioned letter to Vigano, Benedict refused, claiming that he did not have the time to read the volumes and so did not think he could write a commentary on them, writing to Vigano that “I’m certain you can understand why I’m declining,”

Last Week, the Vatican Secretariat for Communication digitally manipulated the photo of the letter it released in order to blur out excerpts of Benedict XVI’s letter.

This in turn sparked outrage from so called “conservative Catholics”. They started to speculate about the content of what was edited, as they thought it might have been a criticism of Francis I.

The decision to release the blurred out part of Benedict XVI’s letter of refusal (released March 17), came in the wake of mounting pressure from so called “conservative Catholics”, among whom the “Twitter hashtag #releasetheletter went viral” (according to reports from Yahoo News)

However, the hidden parts of Benedict’s letter, only revealed his surprise that Peter Hunemann, described by an article in The UK Tablet as “a retired professor of dogmatic theology at Tubingen University in Germany”, was the author of one of the volumes of the book.

The article goes on to state that Hunermann was a “major participant in a declaration by theologians” who attacked — as Benedict XVI wrote — “in a virulent way the magisterial authority of the pope, especially on questions of moral theology”.

These critical words of Hunermann, though, are a far cry from what critics of Francis were hoping for.

If Benedict XVI really had a problem Hunermann’s heretical opinion on “the magisterial authority of the pope” he would have excommunicated him for heresy. That is why his criticisms of the retired professor of “dogmatic theology” ring hollow and hypocritical to true Catholics.

Also, Benedict XVI only had high praise for Francis I in the letter to Vigano, criticising in the process, the very so called “conservative Catholics” who pine for the days he reigned.

In the letter, he referred to their criticisms as “the foolish prejudice of those who see Pope Francis as someone who lacks a particular theological and philosophical formation…”

The problem with these so called “conservative Catholics” is that they mistakenly believe that Benedict XVI is substantially different in his teachings than Francis. They fail to recognise that neither man is a Catholic because neither man believes in all of the Church’s teachings.

Rather, they are both products of the theo-philosophical revolution that took place in Christendom during the Renaissance period, heavily influenced by the apostate writings of Thomas Aquinas and of the robbers Council of Vatican II, which was held during the middle of the 20th century; the apostate and heretical documents of which, were greatly contributed to by Joseph Ratzinger himself.

The reported Vatican “scandal” turned out to be nothing but an expression of surprise by Benedict XVI, that an inconsequential apostate theologian has authored one of the volumes of a book defending “the theological and philosophical” background of Francis I.

He didn’t refuse to write a commentary because the book is defending Francis’ (apostate) theology. Nor did he have any criticisms of Francis I himself. Rather, he had nothing but good things to say about his successor, stating that he would not write a commentary since he didn’t read the book.

Hardly a scandal… All the while, the true scandal of Francis I and Benedict XVI’s many respective heresies continues to go unnoticed by the “champions of Christian orthodoxy.”