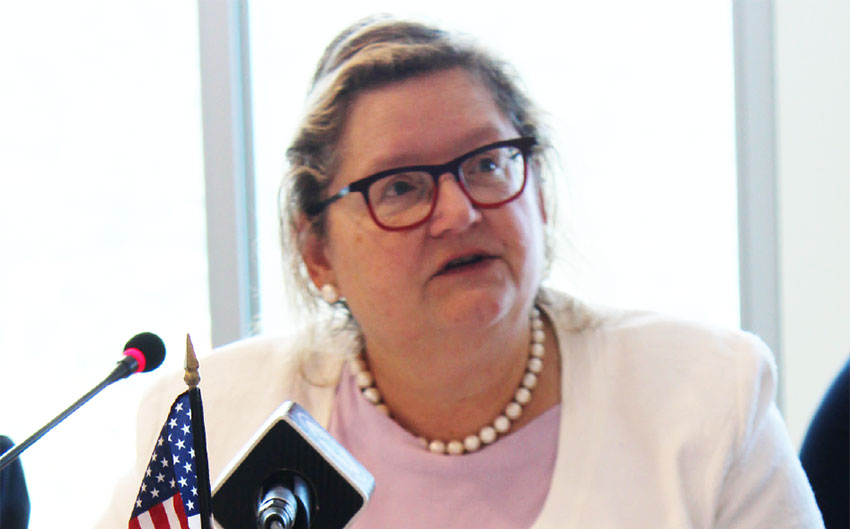 THE Governments of St. Lucia and the United States of America have yet to arrive at some sort of settlement that would lift the restrictions on the Royal St. Lucia Police Force imposed by the latter a few years ago. However, both countries are optimistic this might happen sooner rather than later.

The revelation was made by someone close to the talks between the two countries, Laura Griesmer, Deputy Chief of Mission United States Embassy.

The restrictions imposed on St. Lucia are from a piece of American legislation called the Leahy Law, which was invoked when members of the police force were found to have been credibly implicated in a serious abuse of human rights by the United States government.

America’s interest in St. Lucia and its ability to implement the Leahy Law on the police force is because St. Lucia was a recipient of security assistance from the United States.

A part of the Leahy Law dictates that if a military or para-military unit of a foreign country is found to have been credibly implicated in a serious abuse of human rights, then the United States would have to deny that unit assistance until the host nation government, meaning St. Lucia in this case, takes effective steps to bring the responsible persons within the unit to justice.

The United States imposition of the Leahy Law on the police force is due entirely to events emanating from a police led operation in 2010 – 2011 called Operation Restore Confidence (ORC), which led to the shooting deaths of 12 persons by police.

An inquest into the deaths by local government did not result in the lifting of the Leahy Law. Neither was the law lifted when the Kenny Anthony led government, in 2014, called in a team from CARICOM called IMPACS (Implementation Agency for Crime and Security) to investigate the shootings that the United States deemed as serious abuses of human rights.

Now a third investigation into the shooting deaths during ORC, this time led by a team in the office of the Director of Public Prosecutions, seems to bearing green shoots of improvement between the two countries as St. Lucia moves to meet the United States requirement for the ultimate lifting of the law.

“We have been working with the Government of St. Lucia very closely to improve our partnership,” said Griesmer, adding that a lot of progress has been made with regards to the restrictions on the police force.

“While the Leahy (Law) restrictions are still in place, the government is working hard with us on some of the things it needs to do to meet the requirements in the legislation in the United States,” she added.

Griesmer said she could not talk about the requirements, but noted that the United States holds out great hope for the future on the matter, as the two countries continue to work together.

“The Leahy Law is very specific. When there is a case of extrajudicial killing, there has to be credible prosecution. We have had a lot of discussions with the appropriate authorities and they have been working towards that goal,” Griesmer said.

The relationship between the two countries today since the enactment of the Leahy Law on the police force is a lot better than it was just about two years ago, when the United States chastised St. Lucia for making no meaningful progress towards criminal prosecution.