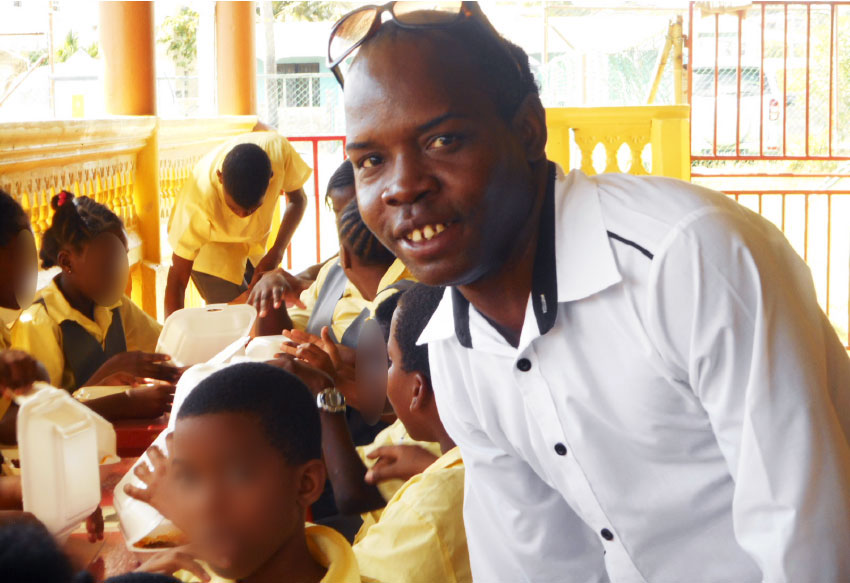 RESIDENTS of Bruceville, Vieux Fort and students from the Vieux Fort Special Education Centre on Tuesday benefitted from the generosity of a resident of the community who provided them with lunch in an initiative dubbed “Feed The Poor”.

According to Davis Junior Serieux, better known as “Pandora” in the community, he catered for approximately 400 people who are underprivileged and disabled.

He said his initiative became a reality with the assistance of a few business-houses and people in the community who donated food and other items and assisted in preparing the meals.

“I told them that I don’t want money, just donate what they can,” Serieux said.

He said the event took place on his birthday and that rather than celebrating it the usual way, he decided to do something to give back to his community.

“I told my friends that I don’t want to have a birthday party, I just want to feed the poor and the underprivileged,” Serieux said.

According to Serieux, his initiative is a way of spreading hope, peace and love in the community where the crime rate is of great concern to residents. He said he hopes to continue the initiative in the future.

Serieux thanked all those who assisted him in making the effort a success, adding that it required a lot of hard work on his part. He identified some of them as Fletcher’s Dry Cleaning, Trans Caribbean Agencies, MaisonSalaison, Hippolyte’s Bar and Kendell John.

Principal of the Vieux Fort Special Education Centre, Palma Joseph, said the school welcomed the initiative and is hoping that it continues. Residents of Bruceville were also delighted by the event.

“This is the work of God. God says those who have should feed the hungry, clothe the naked,” Patrick Hippolyte said, as he ate up a plate of food.

Another resident described the initiative as a wonderful gesture on the part of Serieux.