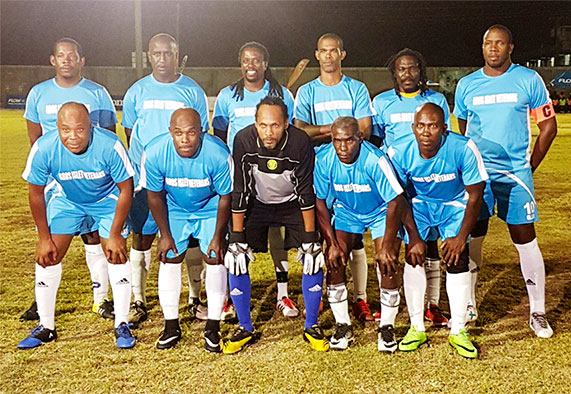 A massive crowd is expected to converge on the Phillip Marcellin Grounds today as the Veterans in Sports Inc. tournament continues with the grand final and third place silverware for the Caribbean Alliance Gold Cup.

From 6:00 p.m., home team Central Vieux Fort will meet Valley Ledgens for the third place playoff. The two teams failed to advance following defeats in the semifinal round of the tournament.

CVF will have the services of their lead goal scorers Titus Elva and Wilbur Moffat (4 each), the experienced Andy Jn. Baptiste and goalkeeper Jeff Emmanuel on their roster.

Valley Ledgens’ lead goal scorer Valencious Joseph (3) along with Layton Sandiford (2), Clifford Sandiford (2), Nevil Harris (2), Lloyd Clifford (1), and Anthony Matthew (1), all goal scorers, expected to come out firing at the opposition to get hold of the third place silverware.

The supporters from both teams expect nothing less than a keenly-contested encounter. On paper, the two teams look well-balanced and based on previous matches played heading into today’s showdown, it is difficult to say which team will dominate. In terms of crowd support, CVF playing at home will start as favourites.

The action on the pitch will shift into high gear for the grand finale at 8:00 p.m. as former champions Soufriere Veterans take on first-time finalist Gros Islet Veterans. Soufriere are determined to win this year’s tournament for the second time and so, too, Gros Islet Veterans. The latter are having the best outing ever and will want nothing less than a win.

The compositions and playing styles of both teams look the same; their fast pace attack, defensive and offensive, short and long passes on the flank are somewhat similar, including the aggression on and off the ball tackle. The coaches on both teams will have a hard task selecting their first eleven, but what will matter most will be the depth on the bench and who come in at the right time to either up the tempo or to slow down the game.

Leading the charge for the Soufriere team is their captain and top goal scorer Jerome Serville, who will have alongside him Augustin Lucien, Chester Francois, Mc Kenley Marquis, Phillip Cadet, and Tony Paul. They will look to make life difficult for the Gros Islet defense that has so far conceded 3 goals in the entire tournament, while Soufriere has conceded 6.

For Gros Islet, the leading goal scorer, Roger Celestine (8) is expected to be in a no-nonsense mood as he will look to nose ahead of Jerome Serville (8) to win the award for the player with the most goals in the tournament.