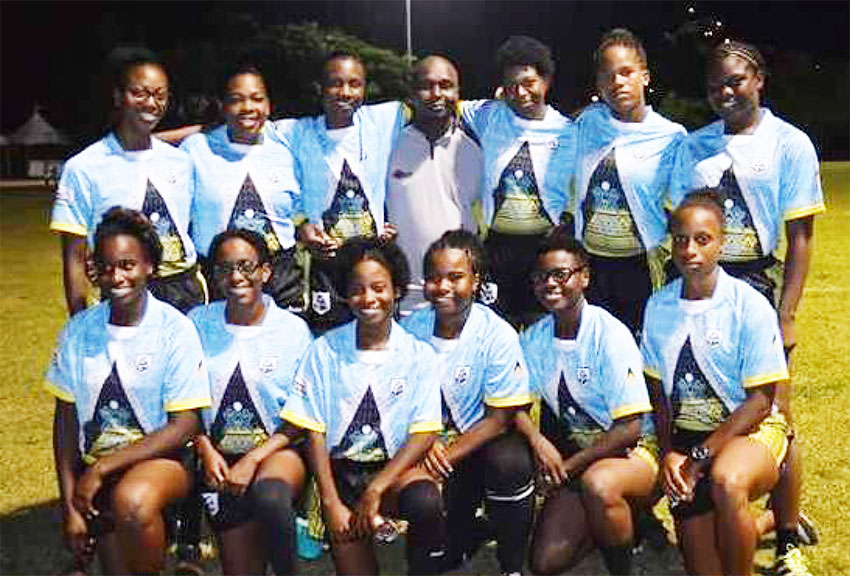 The nine-member team ruled in their pool with convincing wins against the three other teams. Saint Lucia dominated over Oval Minettes of Paris not giving the Parisians any break with a final score of 31-0.

Team 758 had a convincing win against BRUC Rugby Guadeloupe in the cup finals with the opponents barely making their only try in the match 26-5.

The final match of the tournament for the championship cup between Goodluck Club of Guadeloupe and Saint Lucia was almost neck-to-neck. This was the only team 758 lost to when Saint Lucia was represented at a tournament in Guadeloupe back in July 2017. Saint Lucia scored the first two tries of the match but Goodluck came back with a vengeance and made sure our ladies worked hard for the championship. In the end, Team 758 was triumphant, ending the match 19-15 for conversions scored.

The solidity of the team came out in an amazing way on the field. Each team member brought their A-game but what stood out was not individual talents, but instead spectators and other teams saw Team 758’s flawless support and complimenting skills. It was a sight to behold. The team was led by Chantel John, who was also awarded Player of the Match.

The team was accompanied by Team Physiotherapist and Manager, ZhenyaAllain.

Head coach, Garner Felicien, said he had confidence that the team would do well in the tournament and added that exposure to competitions will bring up the standard of play for women’s rugby in Saint Lucia.

The Saint Lucia Rugby Football Union is proud of the Women’s team’s achievement and believes that this team of young women will uplift rugby in Saint Lucia not only for the women’s game but the men’s as well. The Union hopes that achievements like these will inspire growth of the sport on the island. It is a good start to the 2018 rugby season.