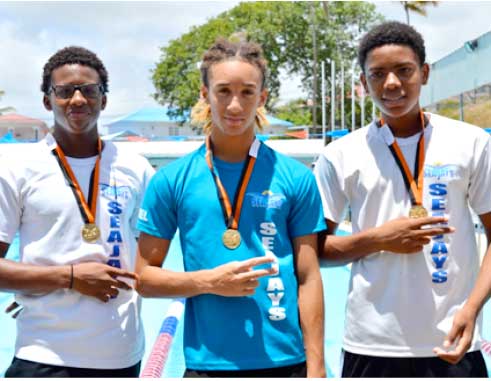 THE Union Americana de Natacion (UANA) will host member Federations of UANA at the UANA Swimming Cup to be held in Coral Springs, Florida, USA from January 19-21, 2018. This swim meet is an approved Qualifier for the FINA Youth Olympics Games, Buenos Aires 2018; Central American Games, Barranquilla 2018; and the Pan American Games 2019.

The competition will be conducted in accordance with FINA Rules 2017-2021 in force at the start of the competition.

Two of the four swimmers, Odlum-Smith and Monplaisir, have received support from the Saint Lucia Olympic Committee as they are both earmarked for participation in the Youth Olympic Games 2018. One of the two swimmers will be given the opportunity to represent Saint Lucia under the universality selection. Parental and club support will take care of the financial requirements for the other two participating swimmers.

Coach Norman Barnfield, assistant coach of the Seajays Swim Club, will accompany the swimmers on their quest to improve their times as they get set to compete against rival Federations from a few of our neighbouring islands. Other competing Federations will include Mexico, Venezuela, Argentina, Colombia, Panama, Paraguay, Haiti, and Suriname, to name a few.

The Saint Lucia Amateur Swimming Association wishes the four participants all the best in their pursuit to succeed in qualifying for future regional and international championships.