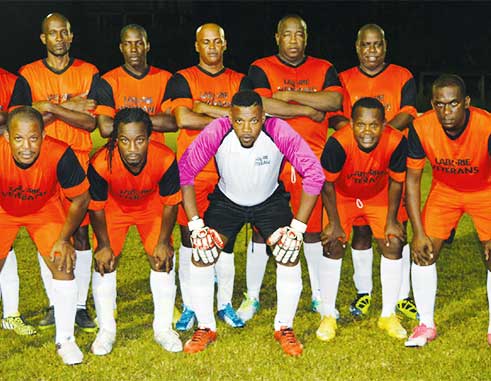 ALL roads lead to La Ressource playing field in Mabouya Valley this weekend for the staging of four quarterfinals matches in the 2017-2018 Veterans In Sports Inc. Football Tournament.

Football fans coming in to take in the excitement will witness VSADC, Behind The College All Stars, Marchand Veterans, Caricom Masters, Laborie Veterans, LabowiConnextions, Vieux Fort North and Flow Lancers FC all vying for semifinal spots in the Plate Championship.

Coming back from the festive season, it is difficult to say whether the matches will be competitive or not. However, one expects it to be no less entertaining than what was exhibited during the preliminary stage. In fact, in the last three matches played at Gros Islet playing field on December 12 and 14, teams were in must-win situations to stay afloat or get booted out of the tournament altogether.

The action kicks off today from 6:00 p.m. with a Castries derby — VSADC versus Behind the College All Stars.

BTC can count their blessings for making it this far; they finished fourth in Group A with 2 points, and have a 50/50 chance to redeem themselves against a team they know very well, including their style of play. Nevertheless, they will have to bring their ‘A’ game on the pitch if they are to advance to the semifinal round. The Sean Kerton-led VSADC team will be pulling all stops to ensure they play for a win. One can rest assured they’re not going to go down that easily.

Tomorrow, from 5:00 p.m., the action is expected to heat up in an all-Laborie derby when Laborie Veterans play newcomers LabowiConnextions. The two teams, during the preliminary round, scored a combined 10 goals (Laborie Veterans 5, LabowiConnextions 5) but also have a similar margin of goals scored against them — 9. So it’s anyone’s guess as to which team will head to the semifinal round. One thing for certain, though, the Laborie crowd will come out in numbers as usual to support their respective teams.

The final game on the night will see Vieux Fort North take on Flow Lancers FC at 7:00 p.m. They both have themselves to blame for not advancing to the Main Championship (Alliance Cup). They were guilty of squandering the easiest of scoring opportunities, virtually giving the opposition the game. As to where this one will head, it all depends on which team really wants it more. But one can nonetheless expect an exciting matchup between the two.