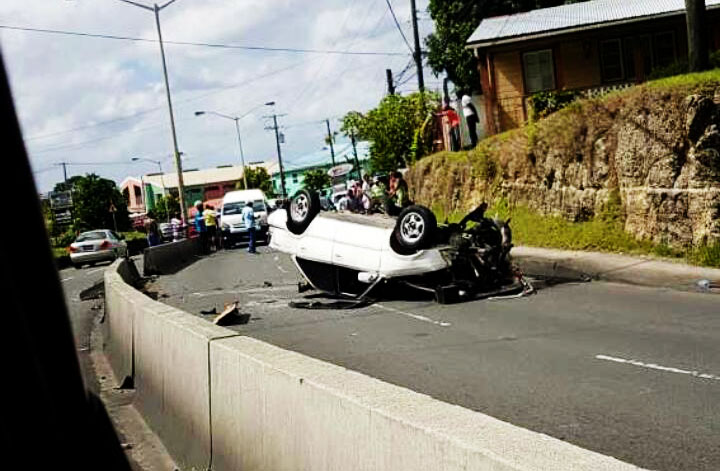 Approximately 24 hours after the island recorded two road fatalities, reports that another accident on the same highway has left one man nursing serious injuries.

One man is in hospital with serious injuries after a collision that resulted in the car he was driving flipping onto its roof.

The collision happened at about 11:45 a.m. along the Castries- Gros Islet Highway. Reports indicate that the vehicle slammed into the protective concrete barriers before rolling-over and coming to a stop on its roof.

Emergency medical crews were pictured on the scene assessing the driver of the vehicle and three individuals who appear to have been passengers in the motor car sat on the sidewalk visibly shaken.

The unaffected lane was temporarily transformed into a two way to accommodate the Sunday afternoon traffic traversing from Castries to Gros Islet and vice versa.

At press time there were no reports of fatalities.

More in Tuesday’s issue of The Voice newspaper as official updates are released.