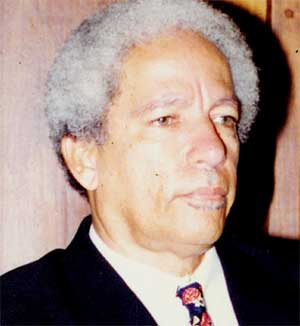 PRESS RELEASE – THE United Workers Party (UWP) has been quietly observing the public debate over the appointment of Sir Neville Cenac as the new Governor General of St. Lucia. We say “quietly” because we as a party have always been of the view that the position of Head of State of our country should never become embroiled in contentious public debate to the extent that personal attacks are levelled at the hold of that office.

The media has been abuzz with unbalanced, uninformed and un-researched information about the new Governor General. Even The VOICE has fallen into this trap, instead of living up to its responsibility and reputation for accuracy and fairness. This is not a criticism, but rather an observation, because it is our belief that our most iconic news medium should never resort to the kind of information that is now prevalent on social media that, to quote these outlet themselves, is not even edited.

In its ongoing tirade against Sir Neville Cenac, the St. Lucia Labour Party has sought to latch onto the fact that Sir Neville had crossed the floor in 1987. Listening to the argument, one gathers that this was the first time ever in the history of parliamentary procedure that this had been done.

The term “crossing the floor” originates from the British House of Commons, which is set up with the government and opposition facing each other on rows of benches. In consequence, an MP who “crosses the floor” also changes on which side of the chamber he or she then sits.

In Britain, from which we take our parliamentary pedigree, scores of Members of the House of Commons have crossed the floor since 1698, when the first crossing took place. One notable name in that lot is the great Winston Churchill, who crossed the floor from the Conservatives to the Liberals in 1904 and crossed back to the Tories two decades later.

Now, let us examine the facts of Cenac’s floor-crossing. In the second of the “twin” general elections of 1987, Cenac as the SLP candidate polled 1,787 votes. Five years later, in 1992, as the UWP candidate after crossing the floor, he polled 1,241 votes, meaning he lost support of 546 voters, even while increasing the number of voters supporting the UWP from 711 in 1987.

The most interesting aspect of this scenario, however, is the fact that in 1992 the SLP, with a brand new candidate in Ferguson John, after the cross-over, could only increase SLP support in Laborie from 1,787 to 1,810 votes—a measly 23 votes. If the voters of Laborie saw Cenac’s floor-crossing as a betrayal of any kind, why didn’t they desert the candidate and the party en masse and throw their support behind SLP’s John with bigger numbers?

But that’s not all. Cenac lost in1992 by 569 votes but in the process dealt some serious blows to the Labour Party’s support base in this reputed SLP stronghold. Let us look at some figures: In Banse polling station in 1987, the UWP received 64 votes. In 1992, after the cross-over, the party with Cenac as the candidate increased this to 143. In Augier, Cenac increased the UWP’s showing by 206 votes from 212 in 1987 to 418 in 1992. In La Grace, Cenac also increased the UWP showing from 15 votes in 1987 to 177 in 1992. There, support for the SLP actually declined from 256 in 1987 to 179 in 1992. Interestingly, it was under Cenac’s representation that these three communities received much-needed services like public utilities, roads and schools.

The point of all of this is simple: If Cenac’s crossing the floor was as unpopular as we are being led to believe, he should have performed more dismally in 1992. Labour should spend some time trying to explain to itself and the country how it is that with winning majorities of more than 1,000 votes in each in four elections (three when Laborie was joined with the UWP stronghold of Saltibus) in 1974, 1979 and 1982 and another 1,000-plus majority in 1987 when the village was a stand-alone constituency, its majority fell to 569 after Cenac had crossed the floor. In fact, with all its boasting and chest-beating, Labour has never enjoyed a four-figure majority in Laborie since.

The claim that “the people” of Laborie resented Cenac for crossing the floor is a blatant lie invented by Labour to justify a 30-year-old grudge. “The people” of Laborie have never told the Labour Party that they were annoyed with Cenac for switching sides and the figures bear this out. It is in general elections, more than anywhere else, that they would make their feelings known.

The SLP continues to be the more popular party in Laborie, no doubt, but that could be changing. In the last elections in 2016, support for the SLP’s loudmouth candidate, Alva Baptiste, actually dropped from 2,346 to 2,094, while support for the UWP candidate was up from 1,362 in 2011 to 1,468 on 2016. These are the facts and figures of Cenac’s cross-over and the state of the two parties in Laborie. They are not figures concocted by our party but are available from the Electoral Office and elsewhere for anyone who is interested.

In a statement issued on Cenac’s appointment, Leader of the SLP, Philip Pierre, claimed to be aware that “supporters and, in particular, the constituents of Laborie remain disgusted and hurt by the events surrounding the switching of political allegiances by the current Governor General following the 1987 general election”. If that is the case, then why are these Laborie supporters not speaking out in the ballot box with greater numbers?

In the final analysis, however, it can be said that Cenac paid the price for crossing the floor. He lost the Laborie seat in 1992, so why is the Labour Party still holding this grudge against him 30 years later?

In his statement, Pierre also stated that the office of Governor General “ideally should be occupied by a person whose character is beyond reproach, commands the respect of the population, trustworthy and a unifying force within the country. Our Governor General should be a role model, one with the moral authority to encourage excellence and respect”.

With that we concur and add that the same credentials apply to several other important positions in our country. And if the SLP subscribes to Pierre’s point of view, how does it explain some of the appointments it has made while in power over the years, beginning almost immediately after independence with the appointment of Mr. Boswell Williams?

Do St. Lucians know the Boswell Williams story as it relates to his disputed ownership of the Sulphur Springs that was in the court system for several years? Does anyone remember that at the height of the leadership controversy in the SLP government of 1979-82, the faction of the government led by the late George Odlum declined to endorse Williams’ appointment as Governor General despite a Cabinet decision by all 12 members of the victorious SLP election team of 1979? Do Mr. Pierre and the Labour Party of today know why? Do they remember the embarrassment suffered by Sir Allen Lewis over his tenure as Governor General in 1980? Do they remember the humiliation suffered by Sir William George Mallet at the hands of Labour? Exactly when was it that the Labour Party discovered that the position of Governor General was an esteemed one?

Neville Cenac has never been accused of any crime and has never appeared in court on a criminal charge but can the same be said about some of the persons who have been appointed by the Labour Party to some of the most prestigious positions in our country? How is it that those who are writing articles about Cenac have not found it fitting to indict Labour’s misfits, pretending that they do not exist when every one of us knows them well? Absent from the debate thus far as well has been the reasons Cenac gave in 1992 for crossing the floor. Why has no one sought to give to Cenac his constitutional right as a citizen to exercise his freedom to associate with whomsoever he pleased?

In the political history of St. Lucia, no group of people has abused and denigrated opponents and important institutions of our country as the St. Lucia Labour Party has done. Its opposition to the Governor General’s appointment is an exposition of its duplicity, deceit and double standards when its own record is taken into consideration. It is an exposition of its classless behaviour that has come to the fore, often leaving a bad taste in many of our mouths, and questioning whether it will ever develop the maturity to properly guide the destiny of our country.