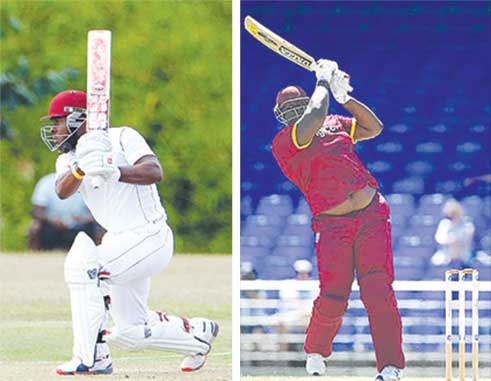 THE Selection Panel of Cricket West Indies has announced a 13-member Windies “A” squad for the three One-Day matches against Sri Lanka “A”, which bowled off yesterday at Sabina Park.

The remaining two matches are scheduled for Friday at Sabina Park from 2:00 p.m. and Sunday at Trelawny Multiplex at 9:30 a.m.

Four players who did not play in the preceding “Tests” have been chosen in the squad. They are: Guyana Jaguars fast bowler Ronsford Beaton, Windward Islands Volcanoes all-rounder Kyle Mayers, along with the Jamaica Scorpions pair of Andre McCarthy and Odean Smith, a member of the West Indies Under-19 side that won the ICC Youth World Cup last year in Bangladesh.

Commenting on the squad, Chairman of the CWI Selection Panel, Courtney Browne, said: “The squad builds on our last President’s XI squad which played against England earlier this year with Jahmar Hamilton retained as captain.

“Players coming into the square are those to replace the players that have moved up to the senior team or those that are not available at this time.”

He added: “Our “A” Team programme is a stepping stone to our senior team and the panels want to encourage players to focus on consistent performances.

“With a full year of One-Day International matches coming up next year, including the ICC World Cup qualifiers next March in Zimbabwe, this is another opportunity, along with the Regional Super50 Cup next January, for players to present themselves for any places available in the senior team.”