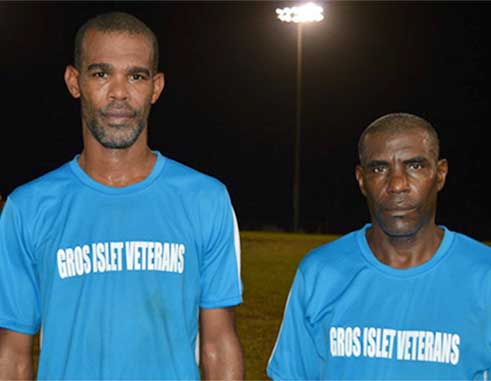 THE Veterans Football tournament being organized by Veterans in Sports Inc. and Caribbean Alliance Insurance resumes this weekend at the Soufriere Mini Stadium with five exciting matches over two days.

The second encounter will see newcomers LabowiConnextions come up against Mon Repos at 6:00 p.m.

Canaries Veterans, another newcomer in this year’s tournament, will come up against neighbours Anse la Raye at 8:00 p.m. Anse la Raye will be coming on a high after their 1-0 victory against Vieux Fort North in their opening match.

Meanwhile, football action continued on Wednesday evening at the Gros Islet playing field with a double-header. There were wins for first-timers Marchand and home team Gros Islet in front of an appreciative crowd despite persistent rain.

In the first encounter, Marchand had a 2-1 over Congorians. For Marchand, the goal scorers were Robert Lewis (53rd minute) and Don Alcindor (81st minute).

Augustin Alcee scored one for Congorians in the 73rd minute, a little too late as Marchand kept a tight hold of their defense.

In game two, Gros Islet Veterans were pegged back from a 17th minute goal from Jonathan John of Flow Lancers FC. But the home team came back when Urban Augustin got the equalizer in the 34th minute. This was Augustin’s second goal in as many matches.

On the resumption, with a persistent shower which made life somewhat difficult for both teams, Shermon Sylvester found the back of the nets for Gros Islet in the 53rd minute as he squeezed one past Flow Lancers FC goalkeeper Vilan Edward to make it 2-1.
The goal tally after 8 matches played now stands at 18. The tournament leading scorers thus far are Mark Francis of All Blacks: Dennery and Urban Augustin of Gros Islet Veterans with two goals each.