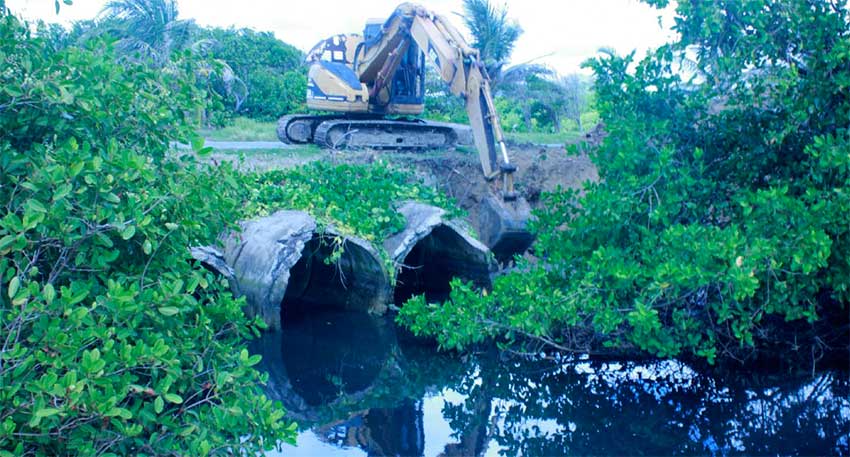 PRESS RELEASE – THE Saint Lucia National Trust (SLNT) wishes to inform the public that rehabilitation of a major storm drain on Sandy Beach commenced last Tuesday. The targeted storm drain is an essential component of a wider drainage infrastructure which was designed to effectively control the movement of surface water emanating from various sources within the Vieux Fort plain. The optimal functioning of these storm drains minimizes the possibility of floods during heavy rain events given the low-lying topography on this community.

Storm drains often become clogged and heavily silted over time if they are not serviced on a regular basis. The consequence is that of a malfunctioning drainage system which does little to lessen the probability of major flooding in surrounding communities and inefficiency in the removal of storm water.

In extreme cases, the storm drains can become damaged as vegetation becomes rooted within the inner walls of the structure. The former was clearly evident in the aftermath of the Christmas Eve trough of 2013, when flooding due to relentless rainfall caused serious damage to both the Sandy Beach shoreline and coastal infrastructure.

In the months following that trough, some concerned citizens of Vieux Fort had raised a red flag about the possibility of major flood damage to the town as a result of some unsustainable practices which were being perpetrated on Sandy Beach. The SLNT, along with some stakeholders within the Pointe Sable Environmental Protection Area (PSEPA), undertook a follow-up assessment and concluded that the coastal area required serious and urgent attention to reverse the trend of coastal degradation while minimizing the threats from floods and storm surge.

The SLNT then proceeded to consult with various experts and partner agencies to provide guidance on remedial measures which could address the threats identified. The SLNT was also able to successfully secure funding to implement some of the remedial measures determined to be most practical and sustainable.

The Saint Lucia National Trust had previously desilted one major storm drain in the vicinity of the Hewanorra International Airport in 2016 under an OAS Sustainable Communities initiative. In this instance, the rehabilitation of the drainage structure located on the southern strip of the Sandy Beach is part of a comprehensive coastal stabilization initiative to address coastal degradation within the PSEPA. This is being executed by the Caribbean Community Climate Change Centre (CCCCC) and funded by the German Development Bank (KfW) under a Local Adaptation Measures (LAMS) Grant Scheme.

The works were expected to continue during the course of this week and as such the public is urged to take note as there may be slight interruptions in the flow of traffic at the work site. For further clarification, please contact Craig Henry, SLNT’s Programme Officer — Conservation (South) at 454-5014 or email southofficer@slunatrust.org.