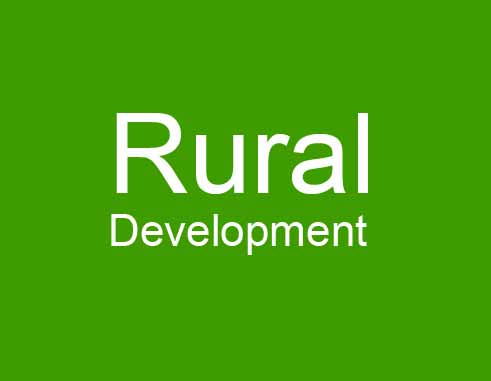 Introduction
THE Anse-Ger community is the most easterly region of the Micoud South Constituency with approximately 500 voters. Incidentally, history has it that Anse-Ger proper is located starting from the sea coast area at the highway junction with the Desruisseaux main road and proceeding due west up to the flat area surrounding the playing field. Continuing westward and climbing a moderate hill which plateaus around the Anse-Ger Secondary School junction and beyond, one is at La-Chauton until arriving around the Daniels.

Beyond the Daniels one is briefly at EnMagau (at Mango), then briefly EnDuchon, then approaches the main Desruisseaux and Blanchard communities where the community services and amenities abound. Those include a civic centre, playing field, a denominational building (Holy Cross Catholic Church) and Parish Centre, shopping, a petrol service station, post office, and elementary schools.

The current inhabitants anticipate that a police sub-station and credit co-operative union will, in due time, be established (at Blanchard) to enhance and improve the developmental package when a more wholesome and modern socio-economic environment will be realized at that part of the Constituency.

Thus, what is now known as the Anse-Ger community consists generically of Anse-Ger, Petit Morne, Ville Pye (thatched village) and La Chauton. Chauton, a French man, was the colonial owner then transferred to Dreuille, also French, then finally Smith Monlouis (Sylvin). The current residents are predominantly the descendants of that same Smith Monlouis (Smith Sylvin), who was brother to Francis and EphrasieSylvin. Smith Monlouis (Sylvin) had eleven off-springs from whence came the current crop of descendants well into their eighth generation. The Smiths, Flaviuses, Alexanders, Jn. Baptistes, Dorvilles of Anse-Ger (La Chauton) are of the same ancestry. Inter-marriage has been the cause of the disruption and changes in title of the descendants.

Generally
The generic Anse-Ger developed under the plantation system, with sugarcane being the main crop. Later, the inhabitants grew cassava and potatoes and engaged in much fishing for their livelihood and have developed slowly since. The Anse-Ger (La Chauton) lands were (erroneously) Crowned, in care, during the LRTP of 1884/87 after a boundary dispute ensued with the Eastern neighbours, which was somewhat settled. A secondary school was built there in the late 1990s. Anse-Ger (La Chauton) was subsequently included in the PROUD project around 2013; an initiative, hitherto of much economic significance to the inhabitants, has since died a slow and painful death commenced under the very SLP government which initiated it.

However, with a progressive administrative regime, having Allen Chastanet as the new parliamentary representative, the Anse-Ger community is poised to become a thriving community. Moreso, with its endowment of historic sites, Amerindian petroglyphs and other features of archeological interest (at Cajouka), in the neighbourhood which can be appropriately transformed to generate economic activity for the Anse-Ger community.

The community has traditionally been clamouring for meaningful economic activity. Consequently, unemployment, youth loitering, drug abuse, lawlessness and prostitution are dangerously becoming the formative way of life within the community. There are no meaningful social amenities, not a community centre or even a chapel for spiritual praise and worship. Regrettably, early school dropout is a high-ranking feature among the youth who consequently gravitate towards harassment, gambling, lawlessness, early child-bearing, drug abuse and other maladjustments. This is an urgent matter for concern to the current administration which, if ignored and allowed to fester, can easily result into further economic and social deprivation and degeneration of the entire community.

The European Model
Conversely, because our urban development pattern is largely of a European model, let us take a page from John Burns, then President of the Local Government Board in 1909, who introduced the first Planning Act of England and Wales which, in broad outline, aimed at making:

1. The home healthy
2. The house beautiful
3. The town pleasant
4. The city dignified
5. The suburb salubrious

Thus, in such circumstances, the need for orderly, wholesome planning and development legislation is the mechanism rendered to government by which it must perform the needs of the people for the betterment of their livelihood. By the same token, the people are motivated by the power of legislation. Like in classical Greece, law and order must at some stage replace undesirable custom — this philosophy was as applicable then as it is today, for the good of mankind.

Indeed, the first object of the 1909 Bill was to provide a domestic condition for the people in which their physical health, morals, character and whole social condition can be significantly improved. Thus, one century later, I find it convenient to share Burns’ sentiments in the current circumstances of the Micoud South Constituency even today.

Subsequent to the 1909 Bill, a British Town and Country Planning Act of 1932 proposed by Warren &Davidge, was partly to establish a policy framework for National Economic & Social Planning. The Act extended planning powers to Local Governments to regulate the development of any type of land, built-up or undeveloped.

In England, the Depressed Areas (Special Areas Development and Improvement) Bill of 1934 proposed by Sir Malcolm Stewart was passed, for alleviating unemployment in depressed areas in England and Wales and Scotland and a Commission was established to facilitate the economic and social improvement of the depressed areas.

The 1932 Act was amended in 1935. The amendment made specific provisions for the control/restriction to the spread of development along main roads, more appropriately referred to as ribbon development (concentrated along the main road). Ironically, even today this pattern of development seems endemic to our island. Even more notoriously depressing is the fact that there are conspicuously no pedestrian sidewalks to our most recently-built roads, thereby endangering the lives of road users, ambulant or otherwise, on feet.

The Housing Minister, referring to the proposed Forestierre housing project, recently expressed the view that “there is close correlation between people’s thinking, behaviour and their living environment.” Sociologically, I can subscribe to this view. However, this is hitherto true for all communities and no less true for the Anse-Ger community.

Moreover, there must be a concept/model in mind when planning a development scheme. In 1898, Ebenezer Howard proposed the Garden City Movement for the orderly and wholesome development of the United Kingdom and beyond, with other major participants including:
• The National Housing & Town Planning Council
• Local Governments
• Professional Associations
(i) Association of Municipal Corporations
(ii) Royal Institution of British Architects
(iii) The Surveyors Institute
(iv) Association of Municipal & Country Engineers

The spirit of this subject charter is particularly relevant to the needs of depressed areas of the Micoud South Constituency, like the Anse-Ger community, and should appeal significantly to the current parliamentary representative who incidentally is also the current Prime Minister. Anse-Ger cannot, therefore, miss the best opportunity for parliamentary attention to eradicate their anti-progressive, poverty-stricken tradition within that community.

Therefore, the way forward for that community is to promote a functionally-integrated community through the media of sporting, educational, economic, social and spiritual development. 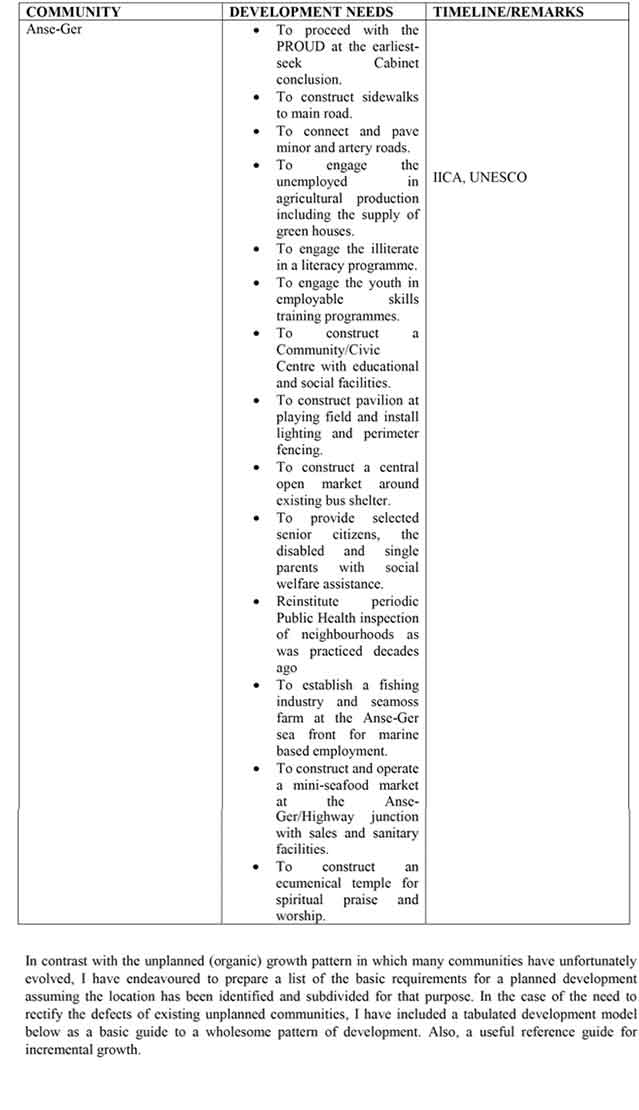