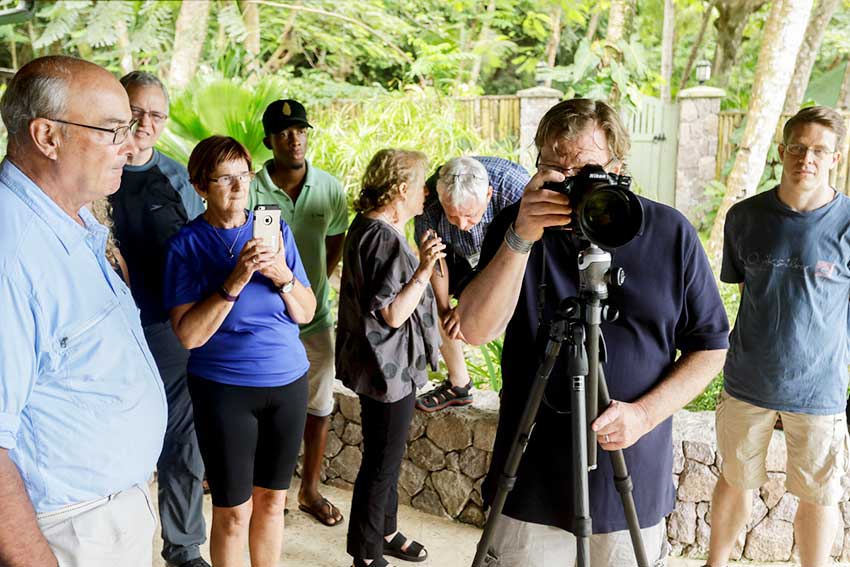 PRESS RELEASE – SAINT LUCIA National Youth Council (SLNYC) reached out to National Geographic Expeditions to afford young Saint Lucian photographer the opportunity of a lifetime. After learning that an Advanced Photography and Lighting Workshop organized by National Geographic Expeditions was being hosted in Saint Lucia, the SLNYC reached out to organizers to inquire about the possibility of the inclusion of local photographers in the event.

After much discussion, a spot was made available for a young Saint Lucian photographer as a local work study. Due to his excellent work in landscape photography, and his award-winning exploits in the tourism industry, Randy Lafontaine from Piaye, Choiseul was selected as the work study.

Joe McNally, one of the world’s most accomplished photographers, hosted the master class workshop at Anse Chastanet Resort for National Geographic Expeditions.

McNally, who led the classes at the eco-friendly resort, boasts a career that includes assignments in more than 50 countries. He has contributed to the National Geographic magazine for more than three decades and has been described by American Photo magazine as “perhaps the most versatile photojournalist working today.”

He is included in the American Photo list of the “100 Most Important People in Photography”, was honoured as a Nikon “Legend Behind the Lens” and voted one of the 30 most influential photographers of the decade by Photo District News.

National Geographic Expeditions said it chose Anse Chastanet because the resort is “blanketed in lush jungles, edged by luminous sandy beaches, and crowned by the staggering twin peaks of its iconic Pitons.”

The six-day workshop was designed to ensure that participants benefited from daily instruction and critiques of their photographs. Attendees also learned the fundamentals of artificial lighting and moved to advanced techniques to take their skills to the next level as they worked hands-on with all manner of small flash techniques — from high speed flash to multiple speed light interiors.

McNally stated that he wanted students to capture the Caribbean spirit of Saint Lucia, something which was definitely achieved, according to reports. The photography workshop was held from Oct. 10–15.

Speaking after the workshop, Randy said that it was an eye-opener and that he left a much better photographer than he went in. He has committed to passing on the knowledge learned during the workshop to willing photographers across Saint Lucia.

The Saint Lucia National Youth Council congratulates Randy on taking part in this prestigious workshop and we wish him well in his future endeavours.