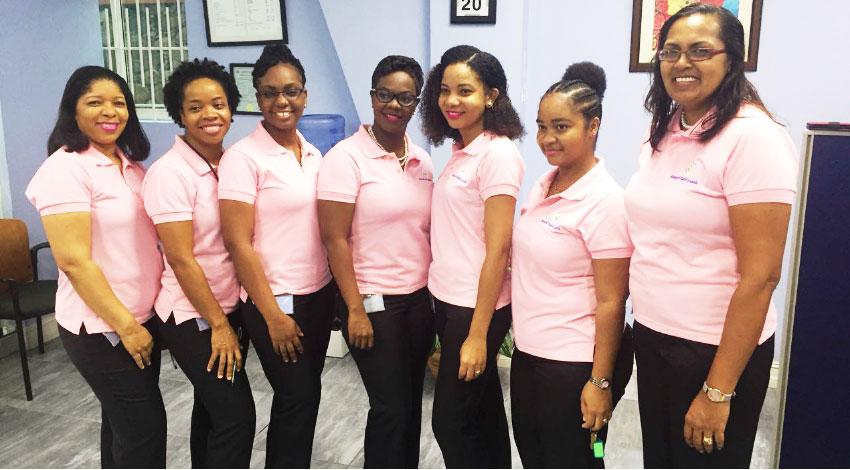 PRESS RELEASE – BANK of Saint Lucia (BOSL) continues to flex its muscle in the fight against breast cancer in Saint Lucia, and even more so in the month of October – Breast Cancer Awareness Month. The Bank has undertaken and supported a number of initiatives aimed at creating greater awareness of the prevalence of breast cancer, the importance of early detection and diagnosis, and support for the many who have been impacted by breast cancer.

For another successive year, the Bank distributed its signature Pink Cans across its branch network. Customers and staff deposit contributions — however small or large — in these cans and at the close of the month all proceeds go to Faces of Cancer. The proceeds from the sale of signature BOSL Pink Bags will also go towards the charity organization.

BOSL has also supported Faces of Cancer by sponsoring mammogram tests as part of its Annual Breast Health Fairs hosted throughout October and early November. Bank staff actively participate in Think Pink Fridays where each employee makes a contribution in order to wear cancer awareness colours on Fridays throughout October and November.

Bank of Saint Lucia is also a collateral sponsor of the Yoplait Walk for Cancer hosted by Massy Stores St. Lucia. Bank staff are expected to play a major role in the walk both participants and volunteers — at the BOSL Gros Islet water stop. The Bank extends congratulations to Massy Stores St. Lucia on the 10-year anniversary milestone of the Yoplait Walk for Cancer.

Maria Fowell, Manager — Marketing & Corporate Communications, explained the Bank’s rationale for its involvement in the event.

“Breast cancer has impacted nearly every household in St. Lucia — directly or indirectly. Even more alarming is the continued increase in incidences of breast cancer, not only in females but also in males. The need for promoting greater awareness of breast cancer and the importance of early detection and diagnosis has never been greater. As a responsible, indigenous institution, it is our duty to lend our support to the ongoing awareness activities,” she said.