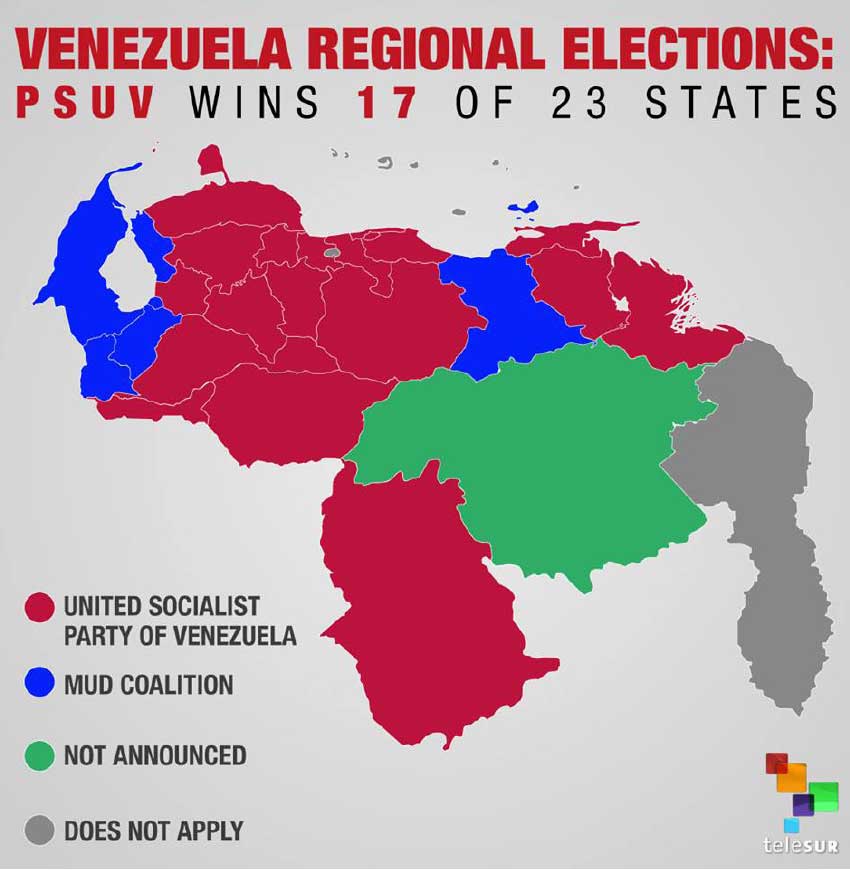 PRESS RELEASE – LAST Sunday, Venezuela celebrated yet another electoral victory. A total of 61.14% registered voters participated in the regional elections, making it the highest percentage of voters in history ever to vote in regional elections. This was election No. 22 in the 18 years of the Revolution.

Following the confirmation of the results of 95.8% of the votes cast, TibisayLucena, President of the National Electoral Council (CNE), released a bulletin report indicating the results obtained in 22 states, including the total number of votes cast and the percentage amount obtained by each political party. PSUV (United Socialist Party of Venezuela) won 17 of the 23 States with the Opposition parties winning 5. The results from the Bolivar state have yet to be confirmed.

Tibisay commented that: “We must highlight the civic spirit of the Venezuelan people and all state security bodies, as they all worked in perfect co-ordination,” commending Venezuelans for their record participation and describing them as “worthy representatives of this country that is exercising our sovereignty as it should be: in peace, tranquility and democracy through the vote”.

It is important to note that a total of 18,094,065 registered voters from all 23 states were called to the polls; however, the Capital District — because it has a different governing scheme – did not participate in the regional elections nor did voters abroad because it is not a national process.

Subsequent to the Tibisay’s announcement, President Nicolás Maduro addressed the nation, congratulating all the Venezuelan people for their overwhelming participation in the elections.

“I congratulate all those who came out to say we have democracy, we want peace. The road to democracy is the debate of ideas, not war,” he said.

He added: “We have won 75% of the country’s governorates and this victory is a moral feat of the Venezuelan people; it is a NO to sanctions and foreign intervention,” adding that Chavismo is alive and continues to triumph.

Following a tour of various polling stations in the country, the international observers from Argentina, Ecuador, Brazil, Bolivia, Colombia, Suriname, Russia, Great Britain, Honduras and Nicaragua highlighted the transparency of the electoral system and congratulated the Venezuelan people on their democratic participation in the electoral process to choose the governors of the country’s 23 states.

Finally, it is important to highlight the observations of the President of the Council of Electoral Experts of Latin America, NicanorMoscoso, who reported on Monday that “the process was carried out in an existent way, in a peaceful and non-counter-order manner”, and that “the citizens expressed themselves freely”.

(Source: Embassy of the Bolivarian Republic of Venezuela)