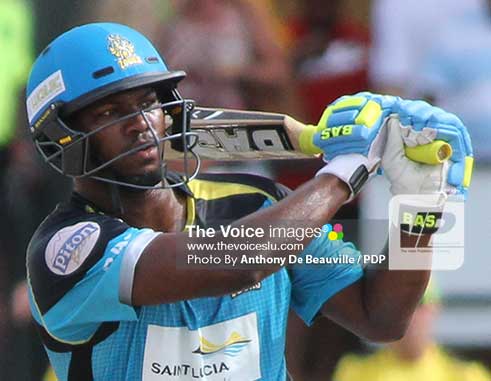 FOLLOWING on the heels of the Caribbean Premier League, where Trinbago Knight Riders emerged as champions last weekend, the focus has now shifted to our very own party in the stands and inaugural Saint Lucia Premier League (SLPL) T20 Tournament.

The tournament bowls off tomorrow from 7:30 p.m. at the Soufriere Mini Stadium with SRDF Soufriere Pitons coming up against Choiseul Craft Masters.

Eight teams have been placed in two groups of four and will compete for SPL bragging rights and the EC $20,000 for the winners, the biggest payout ever in the history of cricket in Saint Lucia.

Speaking at a press conference last week at the Palm Haven Hotel, executive member for SPL, Hassan Euristee, said: “We have five of the teams linked to five local radio stations. We are also looking to stream the matches. Streaming is ideal for persons in the north or the south of the island who cannot come down to Soufriere to see the games. We are looking to fill an 8000- seating capacity.”

Euristee said people overseas who want to see the games, including owners from Saint Maarten and Dallas, Texas, have a huge Indian audience following cricket. With Daren Sammy’s involvement in the tournament, he said, people from Pakistan and India will want to tune in.

The tournament is expected to be competitive, exciting and epic as a number of well-known players — both past and present — including a number of Under-19 players, will be on show.

The action continues on Sunday with the four participating teams playing their second match of the tournament. SRDF Soufriere Pitons will meet Nagico South Castries Lions from 4:00 p.m. and Choiseul Craft Masters come up against Micoud Trailblazers at 8:00 p.m.