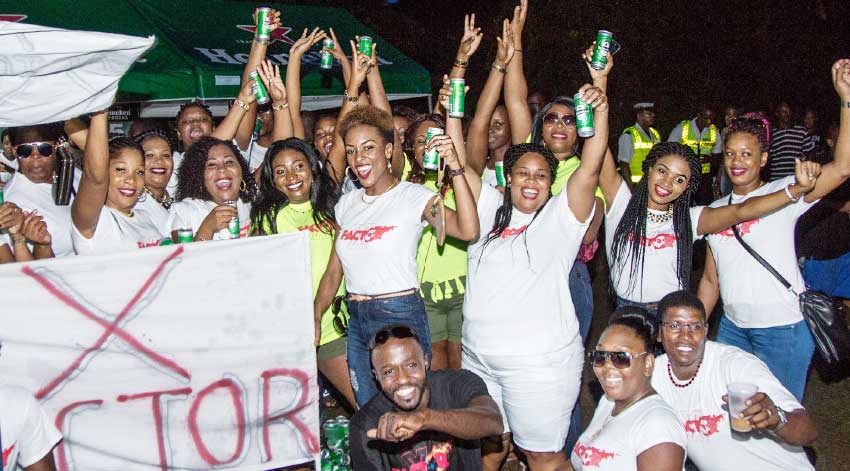 PRESS RELEASE – THE Fond d’Or Heritage Park in Dennery was a wave of excitement last week Sunday. It was the staging of the 2017 Heineken Green Synergy DJ Competition finals and fans came from all over the island to transform the Park into an evening of enthralling entertainment.

Not even some rain showers could have stopped the energy-charged crowd from feeding off the excitement on stage and the ambiance of the venue as fans had the time of their lives.

In the end, two new champions were crowned — one in Skills, one in Clash — following an extraordinary display of talent and skill.

For those coming early on Sunday, not only were they afforded a $10 entrance fee, but also got the opportunity to share the photo booth with the Heineken Ladies and enjoyed free Heineken Light and sampling of Climax Energy Drink.

The event was hosted by Patrick “The Hype Man” out of Trinidad and Tobago and Saint Lucia’s very own MC Donnerville. The pair was quite engaging, providing much enjoyment for the audience as they enjoyed an almost seamless event.

Sunday’s finals also featured guest DJ (and judge) DJ Watty of Trinidad, who turned the party up with his mixes, dub plates and tricks. SupaScorp of One Drop Sounds and DJ Litchie of Litchie Sounds also created a buzz with their entertaining sound clash.

The eight featured the competitive pairings of last year’s winners Lil Yute vs. DJ Deal, DJ Shabba vs. Twinz of Twinz, Run it Red vs. Kerbz Ecstatic and DJ Rufus vs. Hot Skull.

Moving onto the next round of four were Lil Yute vs. DJ Rufus and Kerbs Ecstatic vs. Twinz of Twinz. The finals showdown was between Kerbz Ecstatic and DJ Rufus.

Before the results were announced Sir Lancealot was able to squeeze the last drops of party adrenaline from the crowd who raved like the party had just started with the DJ.

Shortly before 1:00 a.m., Mindy-Luquiana Chicot, Junior Brand Manager, Global Brands at WLBL, presented trophies to all the participating MCs and DJs. The top two places in the Clash were then announced and presented with their trophies.

It was DJ Rufus in second place and Kerbz Ecstatic the winner, with the latter receiving EC$8,000 in cash as well as other prizes.

Chicot, in commenting on the competition, apologized for the fact that a new component, a Scratch competition, had to be omitted on Sunday. This, she said, was due to time constraints and following strict police guidelines about the cut-off time as well as unforeseen weather conditions.

The Scratch component, however, will be staged at another Heineken/WLBL event and will be announced soon. Despite this, Chicot said she has received great positive feedback from people who attended Sunday’s Heineken Green Synergy DJ Competition which, for the organizers, was always consumer and fan-driven.

“I really want to thank all of the fans and patrons who came out on Sunday and made this not just another great event for Heineken, but an incident-free one as well,” Chicot said.

Follow the Green Synergy Facebook page for more on this year’s event and please continue to Enjoy Heineken responsibly, of course!