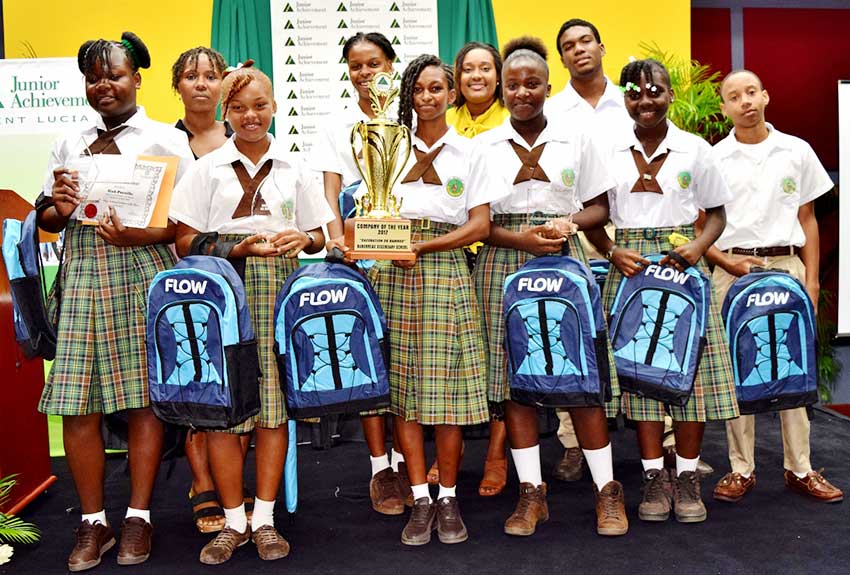 Present were Her Excellency, Governor General Dame Pearlette Louisy; Dr.Ubaldus Raymond, Minister in the Ministry of Finance; Bradly Felix, Minister in the Office of the Prime Minister with responsibility for Commerce, Industry, Investment, Enterprise Development and Consumer Affairs; and Douglas Cheng-Tsung Shen, Ambassador of the Republic of China (Taiwan) to Saint Lucia.

Scores of secondary school students from schools around the island took part in the Junior Achievement programme, a project of the Saint Lucia Chamber of Commerce, Industry and Agriculture. The big winners came from Entrepot Secondary, Choiseul Secondary and Babonneau Secondary. The most outstanding achiever as well as the top performing team received prizes, including trophies and gifts from Saint Lucia and the Caribbean’s leading telecommunications service provider, Flow.

La Vie De Coco, a company established at the Choiseul Secondary School, created hair accessories from coconut shells and sold them to schoolmates and residents of the community. EmerleTisson, president of La Vie De Coco, was named Achiever of the Year. The 16-year-old fifth form student was presented with an LG K8 4G LTE handset from Flow.

Meanwhile, the company which took home the lion’s share of the awards, including the one for best company, was Decoration De Bambou from Babonneau Secondary. They were beaming with pride as they got a number of prizes, including Flow schoolbags, mugs, and water bottles.

Said Agnella Joseph, Executive Director of Junior Achievement: “I wish to express our sincere gratitude for Flow’s assistance in making our 2016/2017 JA Awards Ceremony a success. Without your support and generosity, we would not be able to make the awards ceremony possible. Once again, I thank you as we promote the spirit of entrepreneurship among the youth.”

With the recent launch of mobile 4G LTE in Saint Lucia, as well as a range of tailor-made post-paid and prepaid plans, Flow now gives its customers — including entrepreneurs and business persons of all ages — the ability to do business faster and more efficiently than ever.