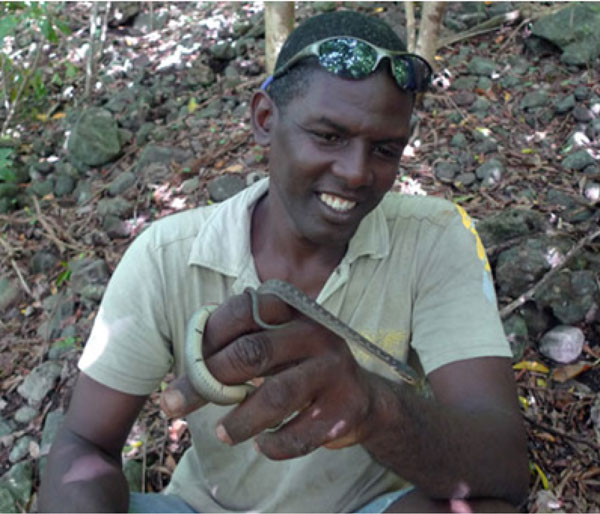 PRESS RELEASE – THE first phase of the public awareness component of a major project entitled “Conservation and Management of the Endemic Fer-de-Lance (Bothropscaribbaeus) on the small island developing state of Saint Lucia” has begun with island-wide research to establish a baseline of knowledge, attitudes and practices/behaviours (KAP/B) related to the Fer-de-Lance snake.

The project is funded by the Global Environment Facility Small Grants Programme (GEF-SGP) implemented by the United Nations Development Programme (UNDP). TheFer-de-Lance, or Saint Lucia Viper, is an endemic species, meaning that it occurs naturally in Saint Lucia only. The findings of the research will inform the development of a public education programme to inform and empower residents on how to safely co-exist with the species.

This project is being jointly undertaken by the Forestry and Land Resources Department within the Ministry of Agriculture, Fisheries, Physical Planning, Natural Resources and Co-operatives; the Durrell Wildlife Conservation Trust; Fauna & Flora International; and Saint Lucia National Trust (SLNT). The project takes the implementation of a five-year Management Plan for the Fer-de-Lance one step further.

In her remarks at a training workshop for enumerators, SLNT Programme Officer for Natural Heritage Conservation, Joanna Octave-Rosemond, explained that the KAP/B survey and the resulting public education programme acknowledge that the effectiveness of wildlife conservation and management is dependent on “how much residents know, what they believe, and how they interact with wildlife.”

According to her, Fer-de-Lance safety training features prominently among the recommended actions to be taken during project implementation.

The five-year management plan specifies building capacity at two levels — for people at risk of snake bite because of their work or where they live, and for members of the public through the dissemination of factual information in communities in close proximity to natural habitats of the Fer-de-Lance.

In addition to training, people at risk will also get access to subsidized resources to prevent snake bite and receive more effective health care if they are bitten. Relative to the public, the aim of public education is to reduce the risk and complications from snake bites.

The SLNT, project partners and Saint Lucia’s medical fraternity have consulted extensively on the snake bite protocol. It is anticipated that insights gleaned from the KAP/B survey will provide guidance on the most effective approach for educating the public on safely co-existing with the Fer-de-Lance as well as the snake bite protocol and the role Saint Lucian wildlife plays in maintaining ecological balance with benefits for all.

The KAP/B Survey will be conducted in Anse la Raye, Canaries, Millet, Dennery and Praslin — natural habitat communities of the species; in Babonneau, Soufriere and Vieux Fort, where they may occur as a result of flooding, where they may have travelled in search of food, or were transported unintentionally by farming vehicles; and in Castries, where the species has not typically occurred. The survey is expected to run from October 4 to November 15, 2017.