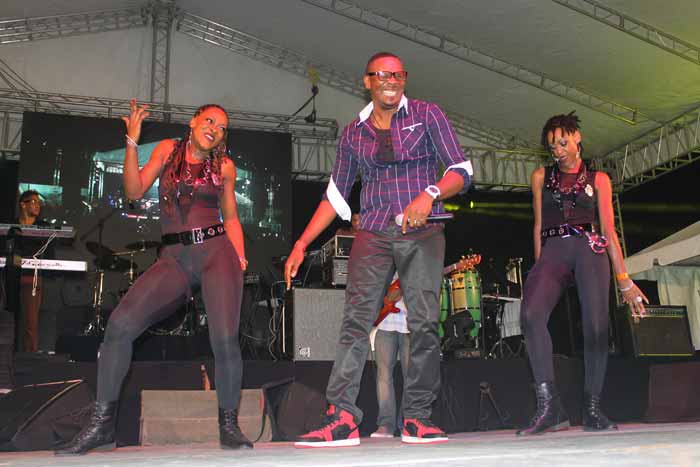 ST. LUCIAN singing sensation, Sherwinn “Dupes” Brice, has once again shown why he is one of the island’s singing treasures after he represented the island at this year’s CARIFESTA celebrations recently held.

Brice, who was accompanied by his Team Dupes crew, including his manager Jonelle James and Dellie “Pearpey” Florenville, was one of seven St. Lucian artistes to show the region what St. Lucia has to offer the art world.

While there, he presented “The Dupes Experience” based on and his “3D” album, which is currently available.

The “Guilty” singer wowed the crowds at the Lloyd Erskine Sandiford Centre on August 25 with smooth renditions of his much-loved hits, including an acoustic version of “Changes”, which was the opener for his set.

The velvet-voiced crooner also caught the attention of numerous links from around the Caribbean, with whom he is hopeful to work with in the future.

Dupes and Dellie also seized the moment to do a number of radio interviews and were featured acts at a special Music Night at the Hilton Hotel hosted by DJ Malcolm X.

The Caribbean Festival of Arts has been in existence since the fifties, and was created for artisans from over 30 Caribbean islands to showcase the unique expressions of their cultures

James said the trip was an opportunity to be with a group of people whom one would not ordinarily get to be with, both artisans and those coming to see them perform.

Brice echoed her words, saying a more in-depth interest and, perhaps just going to the event to experience it and see what worth it can open the possibilities for Brand St. Lucia.

In fact, one song by a local artiste has become the island’s theme sound. The song, “Split In De Middle”, by Freezy, has been burning up the music scene all over the globe, and has even reached as far as Japan.

“As an artiste, I’m really happy to see that we’re being embraced,” Brice said.

However, he said it would be a mistake to align the entire island with this genre of music. He said it’s another notch that puts our island in the spotlight but does not want it to be limited to only that.

This is the perfect opportunity to show the world what else they can get from St. Lucia now that the window of opportunity has been opened.

He said he is thankful to the song’s writer because it proved that St. Lucian music can go global.

Brice said the Dennery Segment has its frustrations, an example was him being introduced on stage as “the artiste hailing from the island that brought you “Split In De Middle”.

He also said people expected to hear him sing the songs in the genre simply because he is from St. Lucia. However, he said it gives him the opportunity to be the best R&B singer that he can be because he then strives to showcase his talent and set himself apart from the genre that is the polar opposite of his.

He said: “I start with putting out the best me that I can be and working with the people that will appreciate me for who I am,” he said.
Coming fresh from the CARIFESTA stage, Brice said he has even more confidence and drive to produce more music.