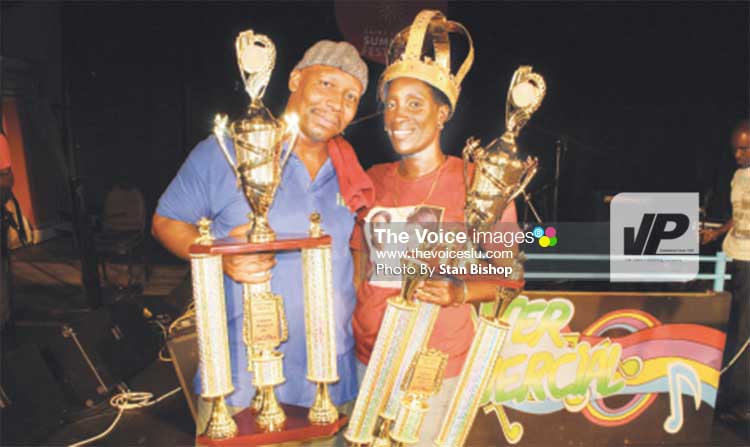 It was the first time that two calypsonians shared the top spot in the competition’s history. But competition was fierce on the night, especially with the standard of calypsos even higher than last year’s.

Beausoliel, who won the first-ever St. Lucia Teachers Union Kaiso Monarch dubbed “Kaiso With Class” – in May, performed her emotive and introspective song, “We Taught Them, Too”, written by Jason “Bachelor” Joseph. In the song, she stressed that teachers play a crucial role in the development of students. Should teachers fail to do so, she said, it results in some students going down the wrong path later in life.

Sharing the title with Beausoliel is this year’s Kaiso Headquarters winner, Raphael, who captured that title for the fifth time last Friday evening at Kaiso Headquarters XII. A regular at Inter-Commercial House Calypso Competition, Raphael performed his hard-hitting “National Inspection Kit”, which sought to address what he felt were the injustices police officers sometimes face in the course of carrying out their duties. It’s his second win in five attempts at ‘Inter’.

As is customary, the liveliest friendly rivalry of the Carnival season lived up to expectations with a packed house cheering on for their respective calypsonians.