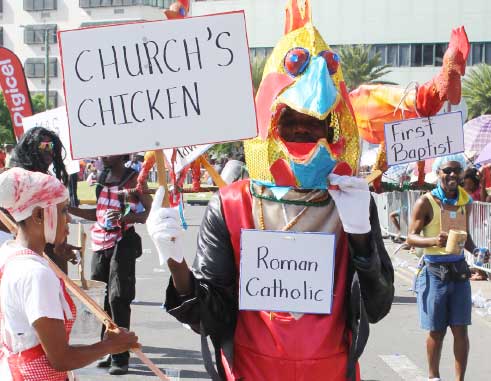 THE tradition of Ole Mas in Saint Lucia is one area that brings a unique identity to the Saint Lucia Carnival. A majority of both carnival lovers and carnival detractors all testify to be always looking forward with anticipation to the amazing communication creativity, wit, humour, and popular entertainment that the Ole Mas players bring into the carnival year after year.

Framed by a themed placard, these individual characters usually parade the streets using unorthodox costuming, props and popular theatre to amuse, entertain, educate and inform the public. Their indigenous artistry is accessible and appreciated across all social barriers.

Kennedy “Boots” Samuel and KendelHippolyte are two iconic Saint Lucian theatre artists looking to extend the reach and impact of this powerful Saint Lucian Ole Mas tradition. During this carnival season, they are introducing a new original theatre concept which they have entitled “Ole Mas Theatre”.

With a first production suggestively entitled “The Big Wood Man”, they bring an Ole Mas character and theme from the streets on to the formal theatre stage to dialogue on men in our society. A man is defined as “a human being with a wood”.

“The Big Wood Man” features on stage the performing skills of actor/director, Kennedy “Boots” Samuel. It is directed by actor/director/writer, KendelHippolyte. The production is scheduled to open at the CSA Centre on Friday and Saturday, July 7 and 8. This will be followed by performances in selected communities across the island.

This first production of “Ole Mas Theatre” will be dedicated to the memory of deceased stalwarts of the Ole Mas tradition in Saint Lucia, such as Athanasius Laborde, Billy Augustin and Morgan George.