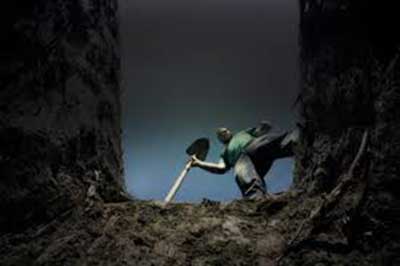 TIME TO CALL A SPADE

Too often, Governments forget that having failed to make any strategic investments of their own, they do not actually earn any money. They just cream off the value-added generated by citizens and corporations. So, if your government is going to commandeer your earnings even before you see them, they have a moral obligation to use that money sustainably, in the best interest of current and future generations. This is a fundamental precept of the social contract which is presumed to exist between any government and its citizens.

Even if Government could raise new money, it will be sucked into the black hole of recurrent expenditure: mostly debt and public sector wages that produce virtually no new growth. So, let’s just deal with the fact that the public sector or the cost of keeping it has to shrink, dramatically.

One innovative solution is to cost-share with the private sector. The public service is full of bright, well-trained, productive minds and bodies; many of them underutilized and demotivated. The private sector needs additional human resources if it is to grow. Why not create a “skills bank” and “lend” that vital human capacity to growth-producing companies? Such cost sharing would reduce resource burdens in both sectors, spurring new investment and growth.

OVER-LEVERAGED PRIVATE SECTORS
The Eastern Caribbean Central Bank (ECCB) should review its capital reserve regime and pay 1% interest on statutory deposits. This would prompt a decrease in lending rates across the currency union, and provide a modest return to banks. It is a small concession ECCB could easily afford which would improve prospects in the financial sector, thus igniting a modest recovery.

That alone will not be enough. The very investment environment needs to change: less bureaucracy, more responsiveness, more transparency, less corruption. To energize investment, we also need a simple transparent path to fiscal incentives. Anyone – foreign or local, politically connected or not – should be able to access standard duty and tax concessions if they satisfy certain objective criteria.

Those criteria should be clearly verifiable and contractual, reducing the need for ministerial interference. This is particularly important for small and medium-sized businesses who form the resilient backbone of the economy, and who cannot afford to offer bribes and handbacks to corrupt officials.

Similarly, the high cost of capital needs to be reduced. It is ironic that in a scenario of excess labour, our governments insist on taxing every piece of growth-enhancing capital that citizens wish to import. This is an old colonial mentality intended to keep the natives in their place as hewers of wood and drawers of water. Instead, our government should find every possible way to encourage the importation of modern plant and equipment, advanced technology, green solutions, world-class tools and inputs that would thrust our people to the forefront of competitive production. Again, the IMF concurs:

If enough fiscal space can be created, considerations should be given to reducing high taxesand duties on imports, which harm external competitiveness.

No such enlightenment so far. On the contrary, St. Lucia fell several places on the Ease of Doing Business index: an important indicator, but one intended to measure how easy it is for foreign businesses to set up here. It is not so accurate in measuring the thousand tribulations small local businesses face each day just trying to stay alive.

For evidence, see the worrying shrinkage in the number of businesses falling off the tax role since the introduction of VAT, and in what critical areas this has occurred. In related news, raising the VAT eligibility threshold to ECD$400,000 is a Trojan horse. It merely denies small businesses the right to reclaim VAT already paid to Government. This is precisely the sort of policy smokescreen the current administration should avoid, particularly on the eve of another rocky budget cycle.

Shortsighted policies designed to suck more and more money into a bloated public sector makes the whole economy less competitive. It also widens the gap between big and small enterprises, concentrating economic power within a few dominant conglomerates. This may produce critical mass and higher efficiencies for a few companies, but it also reduces competition, increases hegemony, and skews political influence.

Rather than encourage more exploitative businesses whose primary goals are market share and repatriation of profits, what we need is fundamental reform to encourage broad-based growth. Truth is, a few mammoth projects will not produce that result. Again, the IMF report confirms:

A comprehensive reform programme is needed to appropriately address key weaknesses and improve growth prospects, but downside risks, both external and domestic, dominate the outlook.

Since we don’t want to throw civil servants out into the streets, we should at least make the public sector more efficient by redeploying and energizing its people. That requires a new work ethic, driven by productivity audits, systemic re-engineering, skill upgrades and new technology. Just the sort of rethink a World Bank would like to fund, and, just the sort of reform that renews the faith of progressive investors seeking viable destinations for long-term capital.

So, the time has come to get over all that testosterone and call public sector unions back to the table. If they can set aside their own politics, they should be very interested in a negotiated approach to public sector reform. Productivity enhancement that drives up employment and wages goes straight to their own bottom lines.

Bilateral and multilateral donors would also be impressed. They too are looking for success stories. It is therefore in our interest to bring them together in a joint recovery strategy led perhaps, by the Caribbean Development Bank (CDB) and ECCB. Both institutions need to stop the lofty shoptalk and the interminable reports, and get down and dirty with the rest of us in the street where it really counts.

Serious and immediate consideration must be given to an IMF structural adjustment programme simply because adjustment with resources is more likely to succeed than adjustment without. Barbados remains in denial and is struggling to delay the inevitable. Better to treat the cancer at stage one. Fresh elections will hardly help.

THE ROAD TO GLORY
To get this economy going again, we need capital – lots of it. It should be long-term, well priced, and deployed in coordinated investment programmes, monitored by joint private/public watchdogs. Applying this logic, Jamaica has finally achieved growth after decades of degradation. The model comes highly recommended.

Most important, our government needs to engage the local private sector: it is time for a serious tete-atete. Kiss and make up, boys; the days of détente are over. Government is not the anointed messiah. It’s a wonderful role if you can pull it off, but the evidence suggests that you can’t.

Also imperative is a shared understanding of just how and why economies work, and what a hemorrhaging private sector needs to heal and get moving again. More inflationary taxes in a recessionary environment is just about the worst combination of economic circumstances imaginable, and unfortunately, a very current definition of VAT.

The private sector also needs to critically refashion its role as development partner with government and civil society. If we merely focus on what we want, then we bring nothing new to the table. Eyeing each with suspicion is not going to get us anywhere. Attitudes like winner-take-all and devil-take-the-hindmost will not work. We are deep in this thing together, but if we can agree that growth, productivity, innovation, investment, and diversification are common goals, then it’s a simple matter of drawing one roadmap that we all can follow.

Government must resume its prime responsibility as facilitator, catalyst, and guardian of the public trust. Too many side agendas are polluting the development debate, so that even well-intentioned governments have become obstructionist without knowing how, when or why. Now that the goody bag is empty perhaps government will stop posing as the grand benefactor; the ultimate Santa Claus deciding who’s being naughty or nice.

Civil society must also now be embraced and dissenters allowed their voice. Communities should be given back their local government rights and responsibilities, and made to feel more like partners. Citizens need to be cast less like perpetual takers, mendicants, and askers for more. Based on information supplied by the Government of St. Lucia, the IMF insists:

So, perhaps the late Sir Dwight was right. The problem is not merely money. It’s LEADERSHIP; not just on the political front, but across the entire spectrum of our small interdependent societies. We have had enough talk about how best to share a shrinking pie: at the end of that story, we all starve. Right now, our economy must grow by a minimum of 5% per annum, just to begin tackling poverty, ignorance, crime and hunger. To do that, we need all our resources consistently and coherently deployed.

Our Prime Minister presumably sits at the top of the food chain surrounded by all manner of counsellors and carnivores. His role is to know the difference and to take the lead in shaping the future; not out of adversarial politics or civil controversy, but out of a new and necessary consensus.

If he believes in his own leadership and legitimacy, the best thing he can do now is to bring all players into the arena – civil society, chieftains of industry, cabinet colleagues, political cronies and opponents – all, kicking and screaming if necessary.

[Adrian Augier is a development economist and St. Lucia’s 2010 Entrepreneur of the Year. A former Economic Assistant at the World Bank and Chief Economist in St. Lucia’s Ministry of Finance & Planning, he also served as Economic Policy Advisor in the Office of the Prime Minister and established the Office of Private Sector Relations and St. Lucia’s first Private Sector Development Strategy. He is also an award-winning writer and producer, and the ANSA

Foundation’s Caribbean Laureate of Arts and Letters, 2010. In October 2012, he received an honorary doctorate from the University of the West Indies recognizing his contribution to regional development and culture.]

For more information on this writer and his work, visit adrianaugier.blogspot.com