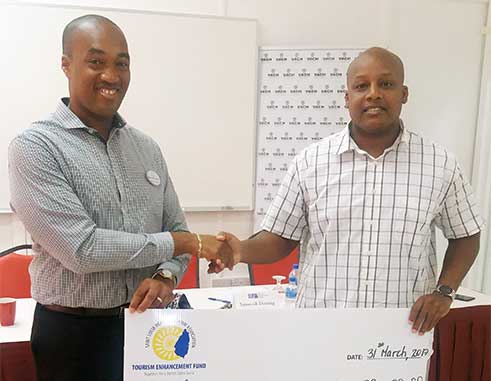 THE St. Lucia Hotel and Tourism Association (SLHTA) has made a major breakthrough in the vital agriculture sector by collaborating with a new but highly-successful local app, Trifarm.

At a press conference held last Friday to unveil the agro-tourism collaboration, it was revealed that the SLHTA’s Virtual Agricultural Clearing House’s (VACH) initiative, which has been operational for one year, has officially teamed up with the app creators with the goal of creating a lucrative online market for local vendors to become visible to hotel chains looking to purchase local produce.

Trifarm is a web portal (www.trifarmltd.com) that was designed to provide real-time data on crop availability by allowing local farmers and producers of fruit and vegetables to register their crops and supplies online, thereby boosting their chances of sales by not just hotel chains, but regular clients and even regional buyers.

Donette Ismael, Liason Officer of Agriculture and Tourism, said there have been many success stories with the SLHTA’s VACH programme which so far has over 400 farmers on the platform. Nineteen hotels and two major food and beverage companies use the VACH. However, she said more needs to be done.

“Despite all of those successes, there are still some hurdles that we wanted to overcome, and now we have found the opportunity to do that where we could now put the clearing house on a virtual platform and people could now sign in, like they would on Facebook, and get information on availability of crops on island.”

Some of the hurdles, Ismael said, include not having analysis on trends and agricultural produce and, therefore, the inability to track what was actually happening on the ground as they would like to Trifarm has now given them the perfect opportunity to do that.

President of the SLHTA, Sanovnik Destang, said for decades now St. Lucia and the rest of the Caribbean had moved to being a services and tourism-based society and that it had been no secret that the agricultural industry had suffered immensely; however, with Trifarm, the economy can have the best of both worlds.

Destang said: “It seemed as if for a time that there was a perception that agriculture and tourism could not grow in harmony and that it was one or the other. A lot of us have always spoken about the need for linkages between tourism and agriculture but it was becoming a buzzword and people, I think, were starting to get a bit tired of hearing it because nothing was actually happening. Well, when we talk to other people around the region about the programme that we have in place, it gathers all the admiration on the regional basis because we are at this point the only HTA in the Caribbean that has a dedicated agri-liason officer and a dedicated agricultural linkages programme.”

He continued: “When we started this programme in 2016, the aim was primarily to bridge that gap but ultimately to allow that trickle-down effect of tourism to filter into the rural communities so that everyone could get a bit of the tourism dollar. We realised that there was a $15-20 million opportunity with hotels importing a lot of produce that could be grown locally. Not only could it be grown locally, but it could be done at a cheaper price and better quality. So it seemed like an obvious linkage that just had to happen and we needed to make sure that it happened one way or the other.”

Destang said that since the inception, the platform has generated a massive response and impressive results producing hundreds of thousands of dollars with just five crops in the space of five months. There are currently roughly 40 farmers and 20 buyers using the app and they are hoping that the numbers will rise sharply.

He said that with the app, vital information is registered and they are able to track trends and determine when there will be shortages and spikes in the market.

Destang said that although it is an evolving platform, members of the SLHTA who have been using the app have all been extremely satisfied thus far.

He said: “It’s only fitting that the SLHTA becomes the first major partner of Trifarm, which only launched about a month ago. We have faith that the platform will work because we’re already seeing great results. We’re looking forward to a great partnership that can really bridge that gap, but ultimately improve lives, livelihoods and really help tourism to play its role in economic development in a very meaningful way.”

Trifarm went live on January 23 and with the app farmers get to input production data in terms of whichever crops they planted. That data then feeds into a live graph which is accessed by buyers, providing valuable and timely information needed to make purchases.

Managing Director of Trifarm Company Ltd., Garvin Francis, said there has always been an issue with retrieving information about what is out there in stock to be purchased; however, all of this is about to change rapidly.

He said: “With Trifarm and the ability to forecast data, you have three months in advance. So if you plant your crops today, you have three months in advance where buyers can be monitoring your crop and its development and you can adjust also for losses and so on. So they can see in advance what is coming on their market, so chefs, restaurant owners, etc. can plan in advance their menus. They can also have the agro- processing industry also being able to make business decisions as it relates to their operations way in advance so everybody is on an even platform and there is transparency in the market. This platform can only get better once you have more farmers coming on board.”

Francis said anyone at any time can register for free and they do not necessarily have to be farmers. He said anyone who has a personal crop or even fruit trees can sign up and capitalise on the opportunity to make money of their crops.

The platform also addresses CARICOM so there are users from other islands as well where there is an opportunity for inter-island trade.

Chief Executive of the SLHTA, Noorani Azeez revealed that members of the SLHTA were so pleased with the programme that they have shelled out thousands of dollars in support of it.

Azeez said: “The Tourism Enhancement Fund had been the major financing entity for this programme and at a meeting at the board of trustees, they took a decision to donate $29,000 towards this project. (These funds) will go towards supporting the Trifarm platform in addition to providing farmers with the training so that we can conduct awareness and sensitisation among the farming belt to get more persons onto the programme.”