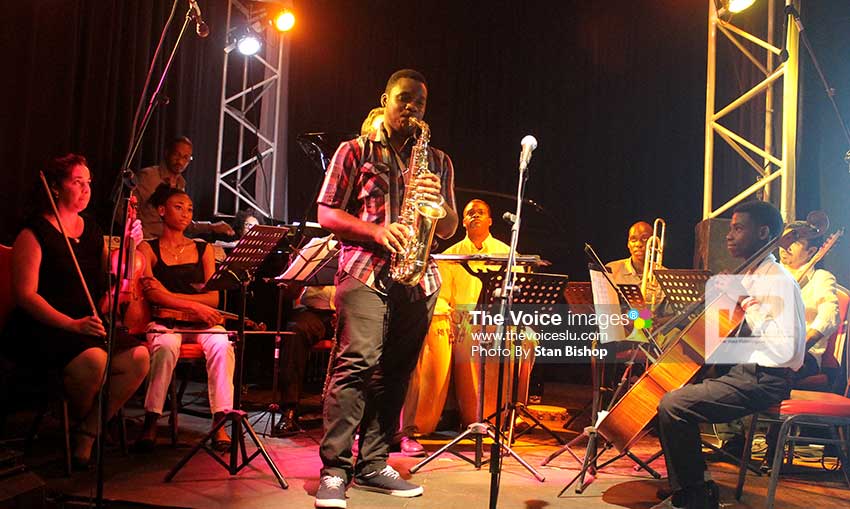 HOW many youngsters these days can actually boast about having their dream job already? In an anemic economic climate that finds youth employment nearing 50%, however, there are some bright gems that continue to defy the odds by getting even with the challenges they face.

Seventeen-year-old Rashaad Joseph is among the newest crop of teenage musical acts that seem destined to do nothing but greatness with their craft. For the past three years, he has been playing the saxophone and is already hitting some high notes and achievements.

Before moving to Saint Lucia from Tortola (where he completed his first two years of secondary school) some years ago, he was already playing the guitar but admitted that he always wanted to play the saxophone. He enrolled at Corinth Secondary School from Form Three level and he graduated last year with a Grade Two pass for Music among his CSEC success.

About three years ago, Joseph won a secondary schools extempo competition which earned him a scholarship to the Saint Lucia School of Music. While there, he found out about the El Sistema music programme run by the Venezuelan government.
Sponsored | Article continues below

He and friend, Dwight Florent, who would later become his bandmate, were among the students chosen for the two-week trip to Venezuela where they received probably the best musical experience up to that time. After returning from that trip, he began playing the saxophone. The Venezuelan experience, he said, was the impetus he needed to raise the musical bar.

“The trip was really a great experience. We would spend about 14 hours a day playing music. At nights, we would still find ourselves playing music on the emergency staircase of the hotel so as to not disturb the other people in the hotel. What was important, too, was being around other musicians who had the same mindset to succeed,” Joseph explained.

Soon after returning from the Venezuelan trip, Joseph and some of his friends started the band, Dynamix, currently one of the best bands on the island and made of up mostly teenagers. Their first performance was at Headphunk. Since then, the band has performed on many other stages – during the Saint Lucia Jazz & Arts Festival — and currently has a gig every Monday night at Royalton Saint Lucia.

Growing up, Joseph said his mother, Lyle, was his greatest influence. Around age 13, while he was still living in Tortola, his mother told him that there was an advertisement for a new music school. She signed him up and he began playing guitar.

In 2015, Joseph received a two-week scholarship to Oregon, United States, where he participated in a jazz workshop. While there, he said, he was inspired by younger musicians who motivated him to raise his standard of play.

Dynamix, Joseph said, play just about anything in the music book: straight jazz, contemporary jazz, R&B, pop, rock. However, he said there is heavy emphasis on Caribbean folk jazz. While Dynamix does covers, band members also write their own music which they hope to release over time. Also, through the use of Instagram and Facebook, Joseph said the band hopes to market itself further afield so as to tap into other opportunities and widen its base.

Sponsored | Article continues below
To date, Dynamix has not toured overseas. However, that is expected to change soon as they have been selected to be part of the Saint Lucia Trade Export Promotion Agency (TEPA) roadshow to England in June this year. The band, he said, has even bigger plans.

“Our future plans include going on tours and making music, make albums,” Joseph tells me. “I like the fact that each band member has their own preferences. However, we all do things together, which makes it all work. So it’s more of a brotherly vibe than anything else.”

Commenting on the band’s struggle, Joseph said music is something band members take seriously, adding that they face many battles just so that they are able to do what they love: play music.

“Many people find what we do easy but never get to see the hardships that we face, including our parents telling us we need to do schoolwork instead of going to rehearsals,” he explained. “Sometimes you have to go against your parents’ advice because you know what good would come out at the end of it.”

The young musician said he and band members remain grateful to other musicians who offer them advice and encouragement as they continue to chart their musical journey. He said many people never get to see the long hours spent in studio trying to get the right sound but instead assume that what they do comes easily. He encourages young people to embrace hard work and pursue their goals.

“Follow what you feel. Keep being positive and create great relationships with people. Don’t waste time on Facebook when you could have been doing something more productive. Have a journal in which you plan your activities. Also, be consistent in everything you do. Keep raising your quality no matter how long it takes. “It’s just about making the dream work, working really hard and taking as much advice you can from everyone,” Joseph advised.