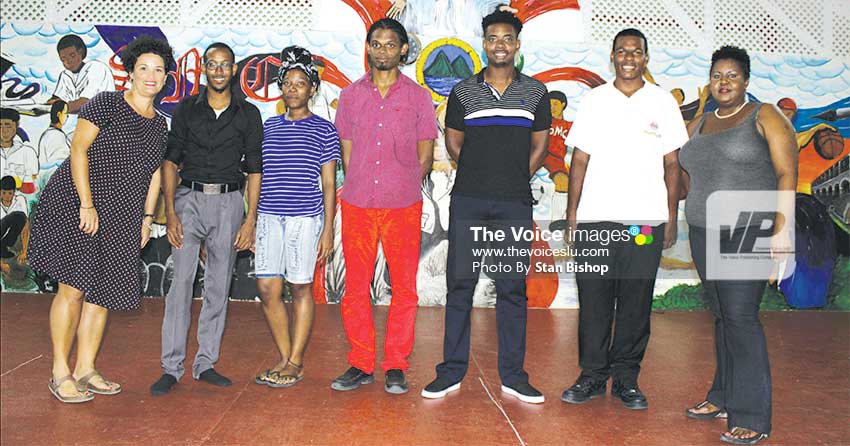 A new play is set to premiere at this year’s National Arts Festival’s Theatre Night and the buzz is that anyone truly serious about theatre arts should not miss it.

“Requiem for a Bad John” is Saint Lucian playwright/poet/producer Katherine Atkinson’s first play and is set in the yard of a disadvantaged Castries village. The play comprises seven main characters and a few supporting actors and encapsulates the deep bonds of community and the circumstances that ultimately fracture them. Characters are Girl, Old Woman, girl’s grandmother, Bad John, her love interest and extended family members Tall Boy, Lazarus, Red Man and Short Pants.

“At the centre of the play is Girl who, like many of the people around her, has aspirations to leave,” Atkinson tells me. “However, that desire to leave is somehow compromised by the bonds that keep her there.”

Atkinson, the recipient of the 2006 Saint Lucia National Arts Festival Prize for Literature and winner of the 2007 Word Alive performance poetry competition, said the play started as her interrogation to figure out the root of incidents of violence, particularly among the youth.

“Was it (because of) circumstances that were driving people to these acts or was there an inherent character weakness or flaw, or a combination of the two? So the play is really an attempt at interrogating that and is in a way the answer,” she explained.

Despite the term “Bad John”, Atkinson said she envisioned the girl at the centre of the play as the “metaphorical masthead for the loss that’s happening in the yard”. She described the play as a tragedy, an exploration of loss, but also one that contains lighthearted moments whose characters use wit to communicate the overall message.

Atkinson said she wanted the play to be urban in nature due to the phenomenon of people coming into the yards and being a source of community and strength for each other. However, she acknowledged that that reality has started to disintegrate, with the yard now seemingly being the place where many social issues are showing up first.

The playwright said writing the play had been “a bit of a journey”, conceding that it began as a poem which she had recited the Word Alive Festival as an exploration of the “Bad John”. She later felt it needed more expounding on and thought about doing so through fiction, which did not pan out the way she wanted. After taking up a playwriting class while she was pursuing a Master of Fine Arts Creative Writing at University of British Columbia, she said, the chips fell into place and she knew what the story was going to be about and the momentum built up from there.
“I feel honoured that my play was selected (for the festival),” said Atkinson about having her play featured at the annual festival. “Drenia Frederick, the Events Coordinator at CDF, had seen the play in a workshop three years ago. When she heard it was finished, I was approached and decided to do it.”

Kentillia Louis, who is directing the play, said that while it does have some light moments, “Bad John” is really about social realism, the hard truths that exist in disadvantaged areas that people – and playwrights – often choose to shy away from. Atkinson, she said, has humanized the proverbial Bad Johns society chooses to point an accusatory finger at.

“Because of how Katherine has written the play, it has given a voice to especially young men and given us a chance to see their story and to feel for them,” Louis said. “Unfortunately, in this society, we have labelled them as being all bad; we don’t see them and think of them as people. That is unfortunate and unfair to them.”

Louis said the play is “a solid piece, very well-written and character-driven”, something that should make the audience reflect and discuss. While she explained that the local theatre-going phenomenon was not riding the high wave of times past, she believes that theatre, especially involving youth, has made a bold comeback to attract the attention that television had captured over the years.

“It will take time for theatre to draw large crowds again. But we’re going to keep at it so as to spread the word. I really do believe it’s going to get better. I have seen, for example, the number of students involved in the arts increasing, which means there’s a market for it. But we also need corporate sponsors on board,” Louis explained.

For Atkinson, the new play affords young people – often the cause and/or fallout from society’s breakdown – the chance to have their stories told and offer them the opportunity to open up about the issues that affect them.

“We’re trying to create opportunities for young people to explore expressions. Also embedded in that process is that we want them to do that through examining their own stories and things that are relevant to them. So there’s a kind of feedback that happens,” Atkinson said.