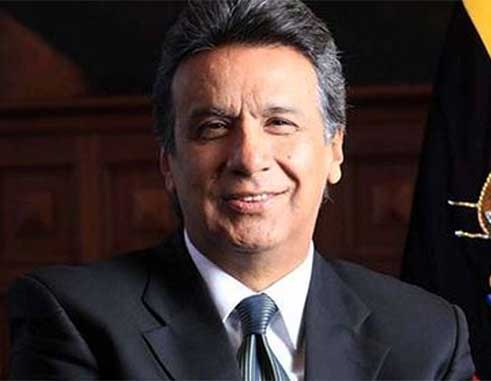 With 97% of the votes counted after the close of voting, the National Electoral Council (CNE) said Moreno gathered just over 51%, while his conservative opponent ex-banker Guillermo Lasso garnered just under 49%.

Ahead of the election, he had said he would call for his supporters to protest if the win was too close for his comfort.

After the first preliminary official result was announced, his supporters were instructed to amass outside the official electoral offices to protest and claim electoral and counting irregularities.

Moreno accepted the result and urged his followers to remain calm, while calling on Lasso and his supporters to enter into early dialogue.

Appearing on a stage flanked by outgoing President Rafael Correa and Vice President Jorge Glas and with thousands of supporters waving victory flags, wheelchair-bound Moreno called for dialogue with the opposition.

He said, “We know how to hear the criticisms. Let’s work together in peace and harmony.”

The head of Ecuador’s National Electoral Council, Juan Pablo Pozo, called on Lasso and his supporters to accept the declared results.

“Ecuador deserves the ethical responsibility from its political actors to recognize the democratic decision made by the people at the ballot box,” he said.

“We have made great strides in social progress in the past decade and we will now continue to do so for the next four years,” he said.

Long added, “It’s important that all sides respect these results and show their commitment to democracy, without throwing around false allegations that their defeat is due to irregularities, or engaging in any actions that seek to undermine the democratic will of the Ecuadorian people”.

This is the fourth presidential election victory by the Allianza Pais party under Correa and Moreno since first taking office in 2006.

The first Allianza Pais poll victory a decade ago ushered in ten years of Correa’s ‘Citizens Revolution’ based on ‘21st Century Socialism’ that saw significant redirection of government policies in the interest of the poor.

It also initiated and pursued efforts at redistribution of national wealth, improvement of social services and reintegration of the country’s indigenous and marginalized groups in national development.

Lasso, a former Finance Minister and banker, campaigned on promises of changing the country’s political direction away from the left and progressive policies of the past decade and closer to right wing and conservative platforms favoured by Washington.

The former Coca Cola CEO in Ecuador and President of the Bank of Guyaquil also promised to decrease taxes.

But memories of his role as the Finance Minister who initiated policies that led to the US dollar replacing the local currency, revelations that he personally profited from investment in currency speculation following the ‘dollarization’ of the economy and more recent revelations that he secretly owned over nine offshore companies, all worked against Lasso.

Wikileaks founder Julian Assange’s future at the Ecuador Embassy in London was also at stake in the election, Lasso having promised to evict him, if elected, within 30 days – after five years political asylum.

Given Lasso’s early promises not to accept a close finish, in the last days leading to Sunday’s vote, he held on tightly to three unofficial exit polls that claimed he had a 6-point lead.

But nine days ahead of the April 2 poll, five final private and public exit polls gave Moreno a similar slight lead, after which all public polling legally ended, in keeping with electoral law.

With the Moreno having been declared the early winner by the same early average 2% lead, there is mounting fear of a possible season of disturbance and unrest if the pro-US former banker insists on rejecting the official results.

But with official observers from across the region certifying the April 2 poll was fair and peaceful, Ecuador’s Citizens Revolution seems set for another dose of 21st Century Socialism in a land where the majority voted to show they prefer continuity over change.

After Moreno’s victory is officially confirmed at the end of the overall count, he will be sworn-in as the next President of Ecuador on May 24th.