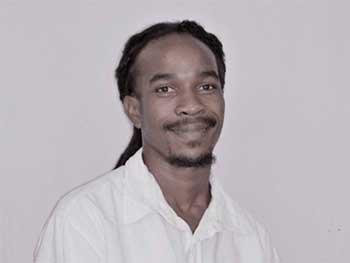 Born December 2, 1992 as Ifari Joseph Singer, songwriter, recording artiste Ifari aka Fari on stage is a young talented Rastafarian male who expresses his creativity through musical performance of his writings.

He states that music has always been his love from childhood; he would frequently listen to the likes of Bob Marley, Peter Tosh and Lucky Dube along with many other reggae artists as a means of entertainment and also some form of therapy for any present rough times he faced. This was frequent being that he was raised a Rastafarian child where the Rastafarian tradition was strongly opposed in small St. Lucia at the time.

He has within his being a wealth of stories of his very unique childhood experiences growing up as a Rasta child having to be constantly defending himself from non-Rastafarian fans from adults to children of his very age group. This very hardship has moulded young Fari into someone who is deeply rooted in his cultural arts as it is evident in his writings, songs and performances.

Fari also had his fair share of musical exposure at his early childhood age as he would attend Niabinghi sessions held by the Rastafarian community where songs of reverence would be chanted along with the playing of musical instruments like the kite, drum maracas etc.

He expresses that this was one of his most profound childhood experiences as he remembers what joy it brought being a part of the celebrations, singing and dancing in praise to the Almighty.

“In my opinion I believe that music has been a part of me from the get go, it is in my very blood. My father is a lover of music and so is my mom. Dad played the bass guitar before I was born and my mom was both a dancer and poet so I believe it’s only natural they gave birth to music.”

Although the young artiste showed his talents in music during the early age of 10 years or there about, where he along with siblings practiced song writing, he only seriously and consistently took up song writing upon his departure from the Sir Arthur Lewis Community College in 2012/13 where he studied and attained his Associates Degree in the area of Business Administration.

He frequently performed his written songs along with freestyle, among his pairs in the Rastafarian community, street side performances along with small stage shows which helped the artist build his musical experience, vocal strength and performance prior to becoming a recording Artiste.

Fari has worked with a few producers doing promotional work and now has announced after the release of his beautifully crafted creole single (Belle Et Jolie) that he is working with CW production studio on his very first, soon to be released, 14 track album CULTURAL VIBRATION where he has been in constant practice gaining experience and growth as an artiste.

Recording artiste Ifari is quite versatile in that he not only sings reggae music widely known to be sung by Rastafarians but also explores other genre’s like dance-hall, hip-hop, R&B and has expressed that anything is possible, it all depends on how he really feels and what comes to mind at the moment.

Also this artiste apart from speaking English is versed in a Creole dialect in which he is known to compose and perform songs. This makes young and talented Fari a very diverse and interesting reggae artiste to look out for as he makes his stride to build his musical career. OH, YESSS!