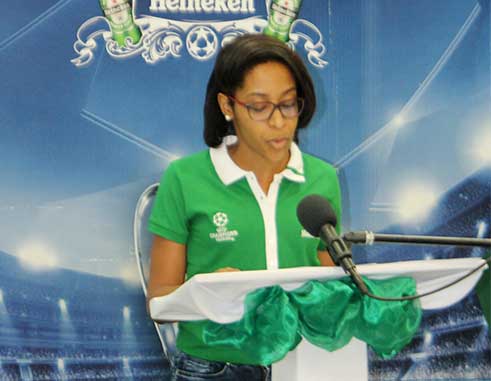 ON Tuesday, Heineken disclosed its new campaign, reinforcing one more year of sponsorship of the UEFA Champions League.

Once again, Heineken brings to its consumers innovative, exciting and high-quality promotions, not to mention the highly-anticipated and popular viewing party for the UEFA Champions League finals on Saturday, June 3, 2017.

Heineken’s relationship with UEFA dates back to 1994, making it one of the event’s longest standing partners, and has this year announced an extension of the current agreement with UEFA as a sponsor for a further three years.

Here in Saint Lucia, Heineken’s UEFA Champions League promotions are going the extra mile in creating a more interactive and internationally appealing viewing party, first held at Baywalk Mall in 2011. That year, the Derek Walcott Square was transformed into the biggest and grandest viewing party and has continued ever since.

“This year, as with everything endorsed by Heineken, we are looking to make our activations and promotions leading up to the viewing party even more engaging for our consumers,” Mindy-Luquiana Chicot, Junior Brand Manager, Global Brands, WLBL, said Tuesday.

As part of Heineken’s mission to engage consumers across varying platforms, this year’s Heineken “Kick It Off” promotion’s key component will be a new website-based application called grabheineken.com

Participation is very simple: consumers connect to www.grabheineken.com, take a picture of the Heineken logo on any bottle or can of Heineken, and play for a chance to win weekly prizes. Like the website indicates, we want consumers to literally grab a Heineken and win.

These prizes will include Heineken merchandise and the most-sought-after prize – VIP passes for the viewing party.

Additionally, between May 25 and 27, Heineken will engage three popular entertainment spots, Coconutz in Rodney Bay, Riverbank in Micoud and Otto’s Bar in Vieux Fort.

During these promotions, Heineken will excite football lovers to participate in a number of fun activities for a chance to win amazing Heineken prizes.

Remember to grab a Heineken, enjoy responsibly with all the excitement of the 2017 UEFA Champions League and take pictures, upload and win!