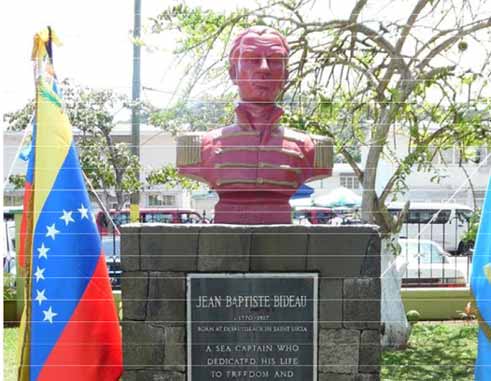 WRITING this column on the actual date of the Bicentenary of the death of Jean Baptiste Bideau, my mind raced back down Memory Lane to 2015 when I visited the place his bones remained buried where he died for all of 199 years.

I was among a group of journalists from the OECS who visited Venezuela for two days to better understand the workings of the PetroCaribe and ALBA agreements to which all OECS member states (and nearly all CARICOM nations) belong.

A visit to Casa Fuerte (The Strong House) in Venezuela’s Barcelona region was on the cards and there I took the opportunity to learn all I could about how Bideau is regarded in Venezuela.

The Saint Lucian combatant was among many who died in their final battle for the defense and liberation of Venezuela from the Spanish colonial invaders and the place has been left the same since that battle two centuries ago this month. No marked graves, just well-informed guides with answers to all questions.

My interest in Bideau had already been considerable since reading Paul Verna’s essay published in The VOICE in 1984 to celebrate the bicentenary of Simon Bolivar’s birth.

From a family of Saint Lucian mariners, I was also attracted by the fact that he was a seafarer and a shipwright who built his own boats. I was even more proud that this Micoud-born sailor had also built ships for and sailed with Bolivar on his many voyages of conquest. Bideau also saved Bolivar’s life in battle and captained his naval flagship, later to become the Governor of Venezuela’s east coast.

Verna writes in “Jean Baptiste Bideau – An Unknown Saint Lucia Hero”: (He) was a free mulatto, born in Saint Lucia. He was an experienced sailor who defended the Venezuelan eastern coast together with Santiago Marino. He saved The Liberator’s (Bolivar’s) life in Ocumare de la Costa and liberated the slaves in Guiria. His spirit of Freedom and equality make him lead the expedition of Chacachacare in the Gulf of Paria and he conquered and controlled the city of Guiria, where he became afterwards the highest acting authority. He accompanied the Liberator in the expeditions to Los Cayos and Jacmel in Haiti, which made an incursion into Venezuela with the purpose of reclaiming the Republic. He was promoted to Colonel for his service to the cause of Independence.

Interestingly, like Bideau, Verna wasn’t born in Venezuela, but in Haiti (in 1927) and wrote several texts about Venezuelan and Haitian history. Like Bideau too, he made Venezuela his home, where the Haitian writer dedicated his life to teaching and historical research.

Three-and-a-half decades after Verna’s eye-opening essay on Bideau in The VOICE, another Bideau publication has been produced, this time “The Story of Jean Baptiste Bideau” by Saint Lucian author Dawn French.

The French Bideau book was launched Wednesday alongside a re-published edition of Verna’s essay (in English and Spanish) as part of several public activities organized here by the Venezuelan Embassy to observe the Bideau bicentenary. A week earlier, historian Gregor Williams delivered a revealing lecture at Alliance Francaise and yesterday – to mark the actual bicentenary on April 7 – a wreath-lying ceremony, attended by the Governor General, was also held at Place Bideau (Bideau Park) in Castries, where Bideau’s statue stands astride that of his Comrade-at-Arms Simon Bolivar.

Publication of Verna’s and French’s books and dedication of a park in Bideau’s name are first steps in Saint Lucia’s centuries overdue posthumous discovery of a great son of Micoud soil who helped liberate several South American states and whose voyages in battle brought him to ride every wind and wave in the wider Caribbean Sea.

Bideau is naturally better known and more appreciated in Venezuela, where his history and contribution are carved in stone. Public places, schools and streets have been named after him and in 2016, a year before the bicentenary of his death, his bones were exhumed and relocated to Venezuela’s national heroes circle, alongside that of Bolivar and other Heroes of Venezuela’s Independence.

The Venezuelan government has always wished that the full Bideau story be as well-known in his place of birth and the current Ambassador of the Bolivarian Republic, LeiffEscalona, has done everything possible to fulfil that desire. The embassy, under her direction, has reached out to and embraced the Bideau family and often visited with the descendants of that great Saint Lucian internationalist fighter for the liberation of Venezuela.

I have also visited the part of Micoud where Bideau lived, where remains from his time are still visible. I have met (some of) his relatives, who are as unknown to his history as most Saint Lucians.

Gregor Williams recently put the question of recognition of Bideau as a National Hero of Saint Lucia to the public, pointing out that the Order governing selection includes consideration of Saint Lucians whose contributions were made abroad. In my book and by my yardstick, Bideau immediately qualifies. It will do well to research his entire history, including his time in Saint Lucia before leaving for Trinidad & Tobago. But even without that as yet, the man qualifies as a Saint Lucian who also contributed significantly to the anti-colonial resistance of Caribbean and South American fighters against imposed European colonialism — Spanish, French or British.

When Venezuela’s President Nicolas Maduro visited Saint Lucia in December 2015, the two governments agreed to jointly commemorate Bideau’s bicentenary in both countries. The Venezuelans have done their part there and here. It will do well, during what is left of the Bicentenary year, for Saint Lucia to play a bigger part in bringing home the benefits of the Bideau Bicentenary.

As Saint Lucia reviews its ties with Venezuela, it is to be hoped that sharing Bideau’s stifled history and contribution to Caribbean and South American history will get a prominent position on the government’s checklist for Caracas.

We have benefited significantly from PetroCaribe and ALBA, without owing a single cent to either: three brand new bridges (in Dennery and Vieux Fort) and renovation of the Sans Souci Bridge in Castries, scores of university scholarships for Saint Lucian students to study in Caracas, hundreds of direct areas of contribution, thousands of laptop computers for students, millions of dollars for NICE, as well as ongoing assistance and training to the Saint Lucia School of Music, participation in the annual Jazz Festival – and so much more.

From 2000 to 2017, from Hugo Chavez through to Maduro, Saint Lucia has only benefitted, never lost, from its ties with Venezuela. Saint Lucians will continue to support Venezuela, as did the thousands who signed petitions in defense of Venezuela as part of an international solidarity campaign two years ago. It is now for the Saint Lucian government to do likewise and step up to the plate honourably, if only in memory of Bideau and his universal and everlasting bond with Bolivar.

That much we owe to Jean Baptiste Bideau!