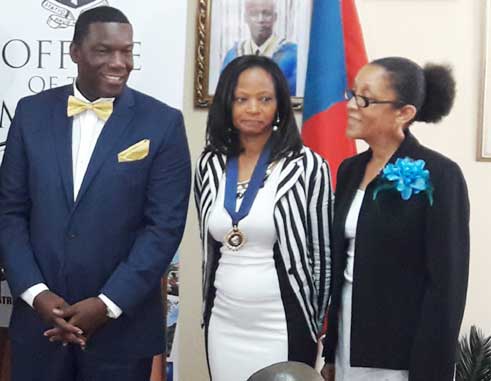 GENEVIEVE St. Croix was officially sworn in as Deputy Mayor of the City of Castries Tuesday Morning at an official ceremony.

As part of the process, Mayor Peterson D. Francis delivered his congratulatory remarks, making the point that he now had “two women serving besides me, one to my left and one to my right.”

On the eve of International Women’s Day, Francis said he was grateful because women were proven leaders and often risk-takers. He added: “In addition, they portray an optimistic attitude, embody and embrace change, and are persistent with a strong and powerful voice. I saw all these qualities in my former deputy Mayor, Anselma Calderon, and surprisingly I see the same in our newly sworn in (the new) deputy Mayor. She is a hard-working woman who proved her muscle during the 2016 election campaign. I say this because women and the work they passionately exude need to be applauded.”

Francis said he was ecstatic “that this swearing-in ceremony took place today. It will mark the unofficial start to the celebration for women.”

One new Councillor in the person of Mr. Felix Deterville was also sworn in at the ceremony witnessed by family and friends.

“So for you, newly sworn-in Councillors the work is just getting started,” says Mayor Francis, while highlighting the need for a futuristic transformation of the City of Castries.

“Give your full support in achieving one common goal. And despite the challenges, be steadfast in your pursuit for development, be hungry to deliver. On behalf of myself and the team members of this office, I say welcome on board.”

Both newly-appointed Councillors gave the assurance minutes after being sworn in that they would be relentless in working towards making the capital the envy of other islands.