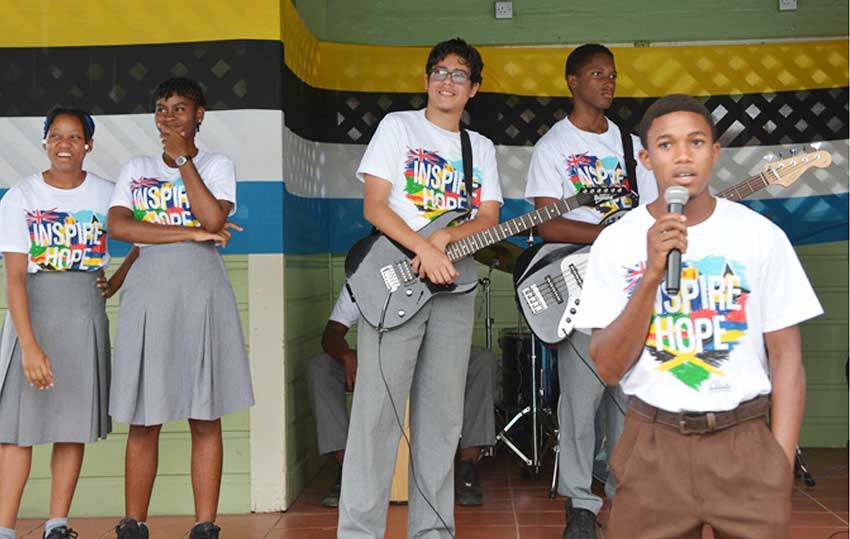 With a Helping Hand from The Sandals Foundation.

ANGE Fontinelle wants to make Saint Lucia a better place to live. The 17-year old student of the Sir Arthur Lewis Community College is studying hard to become an Environmental Economist; a job he laughingly admits is not one you hear many students talk about.

“We have to find ways to create jobs and wealth for our people, while at the same time respecting our environment. I want to be able to make a difference, and if you look at the debate over the proposed Dolphin Park, you can see what an important issue this is.”

Ange was speaking at the 8th anniversary celebrations of the Sandals Foundation on Thursday at Sandals Halcyon Beach Resort. The young man is a proud recipient of a scholarship from the Foundation, something he says is allowing him to realise his dreams.

“I had the brain. The challenge was the cost of studying. I heard about the Sandals Foundation scholarship programme and I applied. Being chosen means that the Sandals Foundation takes care of many of the costs associated with studying, such as transport and books. I am very thankful to them for opening the door for me to realise my dreams.”

Working toward his goal of being an environmental economist is just the first step; someday Ange wants to become Prime Minister of Saint Lucia, because he feels it’s the best way he can help his country grow and develop.

Ange is one of 16 students attending secondary and tertiary level institutions who receive scholarships through the Sandals Foundation.

Since its inception in March 2009, the Foundation has focused on several key areas of development including community, the environment and education, and has so far distributed scholarships to well over 50 students in Saint Lucia alone.

‘We are proud to be able to make a difference in the lives of those around us,” said Regional Public Relations Manager Sunil Ramdeen. He added, “In the 8 years since the Foundation was launched, almost 700,000 people have benefitted from its various programmes at the cost of US$36million. That’s phenomenal, and we want to add that every dollar raised by the Foundation goes back into projects to develop communities throughout the Caribbean.”

The Sandals Foundation has invested in a diverse range of projects in Saint Lucia including improved sporting facilities for young sportsmen and women, making available free dental clinics to communities, environmental projects as well as training programmes for young entrepreneurs to name just a few.

To mark the Foundation’s 8th anniversary on Thursday, students of the Corinth Secondary School band performed live on stage at Sandals Halcyon Beach. The young students were the highlight of the celebrations and serenaded guests during the cutting of the cake.