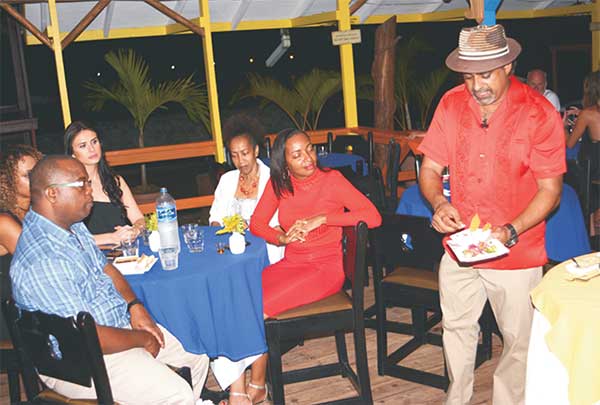 THE Visitor Channel last week hosted tourism officials, sponsors and past guests of the “Stir-It-Up” television show at the season ending cocktail held at the Chateau Mygo Restaurant.

Season two and three of “Stir-it-Up”, represented a dramatic departure from the original concept for the cooking show. “While The Visitor Channel always had the determination to promote the idea of a strong culinary brand in the tourism marketing for Saint Lucia, we anticipated that it would be a welcome addition to include the sites and culture that make the destination unique. The challenge had always been selecting and casting a chef who could fit the role”, a spokesman for the channel said.

With Chef ShaidRambally The Visitor said it encountered a personality with the active outlook on life, engaged in sports and outdoors but who was also grounded by his indigenous Caribbean East Indian family background, while still bringing an external American perspective all wrapped up into one character.

The spokesman added: “The second season of the ‘Stir-It-Up’ show launched with this new host who embodied almost all of the characteristics for our new concept, which focused on the idea to get the cooking out of the kitchen and make it an adventure, combined with an exploration of the island, both physically and on a culinary level.

The Adventure Chef would become the guide to Saint Lucia’s soft adventures as well as the promoter of local cuisine with specific inclusions for local spices, foods and exotic ingredients”.

This last season saw the show exploring elements of environmental awareness, romance, promoting youth involvement and above all dedication to the need to solidify the linkage to the local agriculture sector.
This television show has also been designed for external viewership as the channel continues to create episodes that utilize the incredible backgrounds that the island provides.