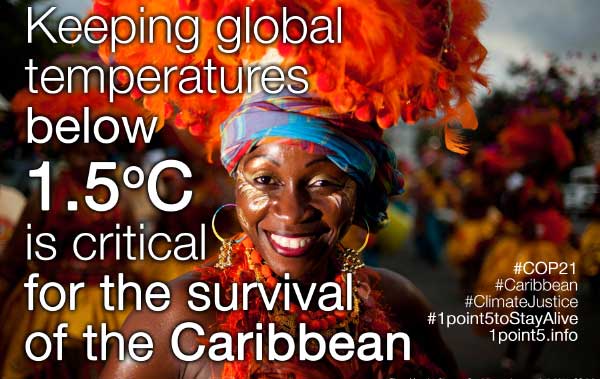 KINGSTON, Jamaica, CMC – If the temperature where you are changes by half a degree Celsius, do you think you would notice?

What if the temperature of the world increases by half of one degree Celsius, would it make a difference to the Caribbean?

In the face of human-induced climate change, Caribbean researchers say that a half a degree Celsius change in global temperature could make quite a difference for the region, which is already being severely impacted by the adverse effects of a warming climate.

Caribbean nations say — and have convinced the global community — that global temperature rise must be contained to 1.5 degrees Celsius higher than pre-industrialisation levels.

That is to say, that the world must make every effort to ensure that the average temperature of Earth’s atmosphere does not increase by more than 1.5 degrees Celsius higher than the levels they were before there were machines and tools to help perform tasks en masse.

The agreement, which has since come into effect, sets out a global action plan to put the world on track to avoid dangerous climate change by limiting global warming to well below two degrees Celsius.

In the accord, known commonly as the Paris Agreement, governments agreed to aim at limiting the increase to 1.5 degrees Celsius, since this would significantly reduce risks and the impacts of climate change.

The Caribbean has long been using the “1.5 to stay alive” mantra in its attempts to convince the global community that if the world’s climate is allowed to rise above that level, the results for the Caribbean will be catastrophic.

Among regional academics looking into the potential impact on the Caribbean of temperature rise of various levels is Professor Michael Taylor, director of or the Climate Studies Group (CSGM) at the Mona campus of the University of the West Indies (UWI).

The CSGM plays a leading role in coordinating and producing climate research related to the Caribbean region.
Its work has been incorporated into several reports for Caribbean Community (CARICOM) governments, including for reporting purposes to the United Nations Framework Convention on Climate Change (UNFCCC), an international environmental treaty negotiated at the Earth Summit in Rio de Janeiro from in June 1992, then entered into force in March 1994.

In a presentation during the Outreach Event on the Intergovernmental Panel on Climate Change (IPCC) Role, Activities and Findings held here this week, Taylor said that the Caribbean does not have a lot of time until global temperature reach the 1.5 degree mark.

He presented alternative futures, dependent on mitigation strategies at the end of the century, telling them that of the four future pathways, only one puts the world at below a 1.5-degree rise by the end of the century. A second message, Taylor stressed, is that the current global rate of green house emissions does not put the world on that pathway or near it.

However, being optimistic, going with the Paris Agreement, the second best path puts global temperature rise at least about 2.5 degrees by the end of the century.

“Hmmm. But we are going for 1.5,” he mused, referring to the Caribbean’s ideal for the world.

“And we hit two degrees in 2051 and 2.5 just about 2100,” he told participants, which included policymakers; international and intergovernmental organisations; climate and disaster risk management personnel; business leaders and organisations; civil society organisations; researchers, youth groups and students, and media professionals.

Drawing on lessons learn from journalists during a one-day workshop ahead of the outreach, the professor said, “can you see then why my first headline is ‘We don’t have a lot of time for 1.5 if we are going to continuing on the near Paris Agreement pathway?’”

Taylor suggested that another news story might capture such a scenario by saying that “even with action which may keep us close to the Paris agreement ideal, 1.5 occurs much sooner than we might be thinking”.

Another headline, he said, might be, “1.5 doesn’t stop the change”.

He showed participants maps of what the Caribbean’s profile looks like from four models when the global temperature rise hits 1.5 degrees.

On the maps, blue means the region will get a little wetter; beige means it will remain about the same or get just a little drier; and brown is really dry.

With a 1.5-degree increase in temperature in the region, most of the models have a little beige for the Caribbean and one suggests that it will be quite wetter. But at 1.5 degrees for the world, the Caribbean may be slightly drier or wetter.

“Now, you might say that sounds like a good thing compared to other option,” he said, noting that this is the mean for the whole year.

“What I haven’t shown you is how this rainfall will be distributed throughout the year. What’s really happening is that we are going to have longer dry spells and when the rain falls, it just really falls. Now, that may not be such a great thing.”

Looking at warm spells for the Caribbean, 2016 was particularly significant because this year, more than any other, the region felt these warm spells, Taylor said.

He said that in addition to comfort, warm spells have significant implications for health.

“We are talking about asthmas, etc. and that is saying that even at 1.5, it will be significantly warmer.”

In terms of hot and dry spells, these will increase in the region even at 1.5.

Taylor said this is important because of its impact on water availability.

“And that’s your energy as well,” he said, suggesting another news story might report that “limiting global warming to 1.5 does not stop further significant changes in regional climate with which the region will have to contend”.

But, a 1.5-degree rise in temperature is still a better option than a globe that is 2 degrees Celsius warmer than it was in pre-industrialisation levels. Taylor illustrated by returning to his maps, contrasting the changes at 1.5 and 2 degrees. In relation to rainfall, the region will move from blue (wet) to red (dry).

“I don’t need to tell you that the models are seeming to coalesce around a drier Caribbean… And the idea is, this is additional change on top of what you have seen before.”

In relation to the hot and dry spells, those will continue and see further change in that same direction.

A third news story, he suggested, might be that “two degrees will result in further significant changes over 1.5 in regional climate, which takes us to climate we have not experience to date and will likely disrupt lives as we now know it”.

Taylor said interim conclusions are that the Caribbean has already seen significant impacts under a 1.5-degree rise in global temperatures.

“What I am saying, going for 1.5 versus 2 is not a matter of splitting hairs; it’s a significant difference. Perhaps, there is need for greater global action that goes much further than implied by 1.5,” Taylor said.