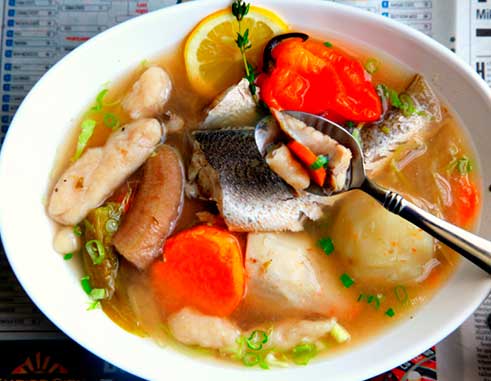 According to the Creole style, fish is prepared as a ‘one-pot’ together with green bananas, plantains, macanbou or any one of a variety of yams. Breadfruit, dasheen or potatoes while accompanying the fish meal are not cooked together with the fish but are prepared separately. Before the advent of mass produced chicken, fish was consumed in greater quantities and ironically, was considered the poor man’s food. Simply stated, fish is a good source of nutrients for a healthy diet, with its vitamins and minerals. Ground provisions provide much needed carbohydrates and fibre. Breadfruit is rich in energy, dietary fibre, minerals and vitamins. Sweet potatoes, of which there is a wide variety are a richer source of food than the imported or what is commonly known as Irish potato. The purple variety is rich in antioxidants while the orange-coloured one contains beta carotene, a substance which is necessary for maintaining healthy eyes.

Kamanyòk / Manyòkdou(sweet cassava)
Unlike the other Caribbean territories, in Saint Lucia, Cassava has not been a popular vegetable despite its high nutritional content. However, two by- products of Cassava, in the forms of Farine or fawin and more recently Cassava flour are used in Saint Lucia.. Those who have discovered that they are susceptible to gluten will be pleased to know that cassava flour, which is a ready substitute for wheat flour is gluten free. It is also grain free.

These dishes will surely feature during the creole celebrations. Patrons can be assured that consuming creole food is a decisive means of nourishing their bodies. This thought, along with delighting in the flavours should enable all to appreciate that they are engaging in a totally wholesome activity.