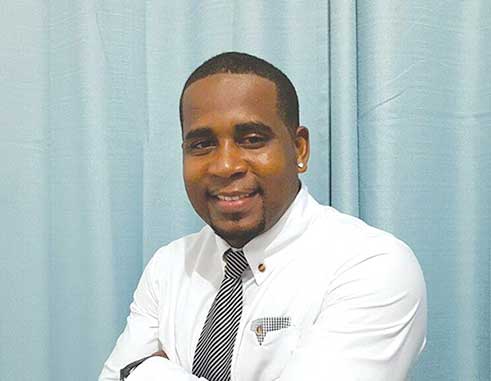 INARGUABLY, technology has taken over the lives of the vast majority of the world, and the marriage between smart phones and modern day tech has created a baby that has us all gripped by the very last brain cell.

Even the most independent mind who tries to live away from norm, like a lone wolf, will at some point depend on tech.

There really is no escaping it, unless you choose to go to extremes like the tiny number of individuals who choose the hermit lifestyle or of course, if you form part of the less fortunate population…then again, if you are reading this paper, or better still, if you read this piece online, then I doubt that you fall into that category.

Anyway, day by day, technology tightens its grip on the masses and whilst some try their best to keep it at bay, others, like today’s FITC, embrace it wholly and unapologetically.

Valentine Dantes is a Creative Writer/ TV Producer at All Biz Ltd; however, he moonlights as a phone tech whiz, whose knowledge on those pocket sized super computers, a.k.a. mobile phones is so vast, that he has even been given his own show called Chef Android on Calabash TV.

The 31 year old said his passion for phone tech started back when he was 22 and he purchased a Nokia N900. He said his eyes were opened to a new form of technology that made his life so much more convenient that it had him at Hello.

The VOICE’s interview with Dantes almost turned into a debate, but let’s just say that he truly does know what he’s about and that he is in the driver’s seat of this love affair.

The VOICE: Tell me about your passion for phone tech.

Dantes: Technology amazes me because it can substantially change how we live, the way we do things and even the way we see the world. It surprises me how so many people can be satisfied not knowing that there are potentially a hundred smarter ways to get things done today. My first smart phone was a Nokia N900…in those days it was probably the smartest phone ever built before android became popular. I used to do things with my Nokia that people were astonished by, and eventually as I upgraded, friends started bringing their phones over to me to help them do various things…nothing large scale though, just at home whenever I have the free time.

The VOICE: So is your wealth of tech knowledge restricted to phones or does it go across the board to other computers and robotics etc?

Dantes: It goes across to everything, even the dreaded iPhone that I hate so much yet appreciate on so many levels. The show has a “What’s cooking in the tech world” segment that I use to talk about general stuff whatever it’s a new development that might be useful or interesting to know. I’ve wanted to do the show for years but never really took the initiative to get it done until I happened to have mentioned it to my boss and he liked the idea and told me to run with it.

The VOICE: But why the fascination though? What is so attractive about tech that has you hooked?

Dantes: The idea of being able to do things faster and easier is really what grabbed me. The things I can get done using Microsoft Excel, using my phone, using an app etc. and seeing people struggle to do it the old fashioned way made me want to always be in the know. The only down side to it I suppose is that you have to always be in the know as technology is forever changing, but so is the world right?! The average person has to spend at least $60 to $100 to unlock a smart phone…I unlocked mine myself because I also wanted to save money, so that too was a motivator. Being able to save money buying things online compelled me to research every possible thing there is to know about shopping on Amazon and ebay so that I can take advantage of the opportunities. Knowledge truly is power, and to have that power is to have a competitive edge in every facet of life.

The VOICE: There is growing concern that smart phones are breeding “Stupid” people…in other words; tech advancements are “dumbing” down society. What are your concerns there?

Dantes: I agree to some extent. I hate that it has made us more anti-social and more connected online than connected in person; however, you can’t blame a tool for how it is being used. A gun in the hands of the police verses a gun in the hands of a criminal can produce two very different outcomes and emotions. We know that the Internet and smart phones etc. are great tools to have, we just need to train people, especially the younger ones on how to use it. The technology isn’t just about chatting and socialising better, it’s about learning, reading and exploring more efficient ways to succeed.

The VOICE: But with so much to do in terms of apps, activities etc, isn’t using it properly the exact cause of laziness, stupidity and antisocial behaviour?

Dantes: Laziness is subjective. Being able to save all my contacts with one click as opposed to writing down all 500 of them on paper isn’t lazy in my option, it’s about working smart. Stupidity, that depends on the usage. There are so many educational apps for school, reading, studying and learning out there which provides a wealth of knowledge to anyone who wanted to learn. The same goes for the anti-social behaviour…I could watch TV for an entire day, but then I won’t think of blaming the TV for how I have made use of my day. We need to talk about smart phones and their usage and include it in time management seminars, especially where the youth is concerned. The issue at the end of the day isn’t the tool but how is being used

Dantes: There are some things that phones will never be able to do, (Laughs) but when it comes to books, I actually prefer reading eBooks as I can easily adjust the light, not to mention that I can have up to 1 million options to read at once wherever I go. A similar argument can easily be made about the bible…walk with a heavy physical book with one version or over a dozen versions on one app?!

So it really depends on the activity. When it comes to gaming, I really wish kids would still go out to play instead of stay at home on their phones and computers, but that’s something that their parents ought to manage.

Dantes: (Laughs) That’s a good question…reminds me a “The Book Of Eli” movie. Life is about adjusting to change. If the technology isn’t there, I’d just have to adjust. Our parents didn’t die from it, I didn’t die from not having it as a child and I’m pretty sure that I’d survive if it were to happen in the future.

The VOICE: But seriously…at the very moment, how would you feel and cope?

Dantes: I’d be a bit disappointed to be honest…no more smart TV or magic remote? (Laughs) but I’d be fine…once I have the right people around me.

The VOICE: As we know, it’s all about moderation and using the tools properly, so with that said, what would you say to a person who is dead set in their ways and is against phone tech advancements…how would you try to convert them?

Dantes: I had a friend who refused to resort to online bill payment, he wanted the peace of mind of knowing that his payments actually went through, but I showed him how I did step by step and how easy it was, without having the hassle of walking in town or taking lines. As to his issue of peace of mind, I reminded him that online bill payment is facilitated by the banks and if he doesn’t trust a feature of the bank he might as well go back to burying his money in the back yard or in the mattress (Laughs). Sometimes they just need to see it happen live in action to believe it. That’s what may make the difference.

The VOICE: And finally, to the serious addicts out there, what advice would you give to them to lift their heads up once a while and be part of the physical world around them?

Dantes: Phones are nothing more than a tool to be used to make life easier…it isn’t the essence of life itself. A carpenter doesn’t go the supermarket with his tools or on vacation with his tools. There is a time and place for everything under the sun. Why spend hours talking to someone who isn’t physically with you at the expense of those who have taken the time or made the sacrifice to be there. Not all messages require an immediate response.