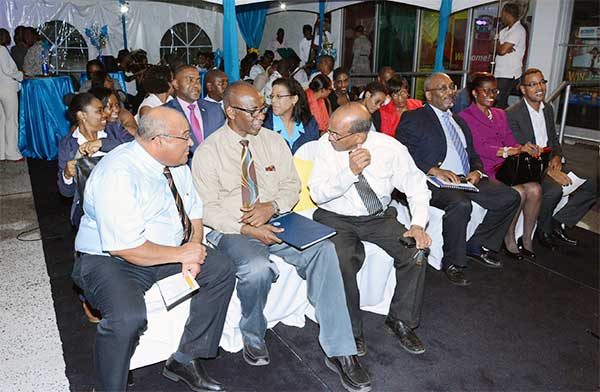 THE Institute of Chartered Accountants of the Eastern Caribbean (ICAEC) officially opened its Secretariat last Thursday with a gathering of distinguished industry professionals and individuals who have made a significant contribution to the profession in St Lucia and the wider community.

The proceedings were conducted by the various members of the Council, and the key note address was delivered by Mr. Calixte Leon – Executive Director of the Financial Services Regulatory Authority who welcomed the launch of the Secretariat as it augured well for Authority’s important partnership with accountants.

The Director General of the OECS Commission Dr.Didacus Jules looked forward to the Institute adhering to the highest ethical and professional standards and to undertake a vigorous and broad public sensitization campaign.

Jules praised the launching of the Institute as a move away from a colonial past and mindset.

“This marks the assumption of full professional responsibility by Chartered Accountants of the Eastern Caribbean – you are taking back the power that never should have been ceded.

“Let us have no illusion that the growth and evolution of this Institute will be faced with many challenges but the greatest of these will be the battle for acceptance and respect – not externally but internally. To win this battle, the Institute will need, from the outset, to adhere to the highest ethical and professional standards, undertake a vigorous and broad public sensitization campaign, build a foundation for sustainable growth and establish strong strategic relationships globally with best in class allies.”

He said that the members should understand that their success in this venture is not just about the accounting profession in the Caribbean coming into its own.

“Every professional body in the OECS in particular which creates this platform for global competitiveness and self-regulation helps, in so doing, to consolidate the unity and capacity of the Single Economic and Domestic Space.”

During the ceremony, awards for their lifetime contribution to the profession were presented to Mr. Anthony Atkinson of Grant Thornton, and Mr. Claude Griffith. A special recognition award was presented to Dr Michael Pilgrim for his continued support of Professional Development.

The Institute of Chartered Accountants of the Eastern Caribbean (ICAEC) was launched on June 17, 2004 after members of the OECS, including Dominica, Grenada, Montserrat, St. Kitts-Nevis, St. Lucia and Antigua-Barbuda, ratified the agreement.

The purpose of the institute is to provide support and assistance to its members throughout the Eastern Caribbean. The ICAEC has a branch in each of the countries within the OECS. There are 6 branches and approximately 250 members within the ICAEC.