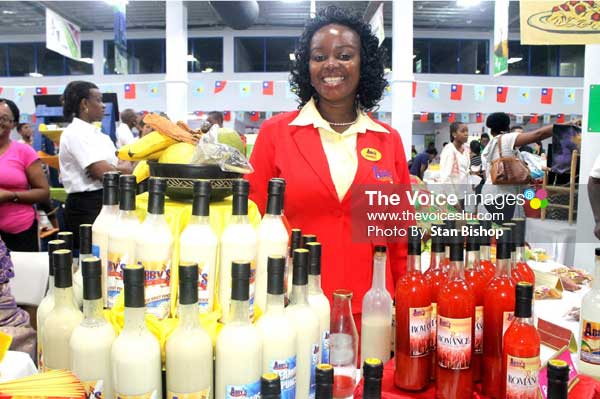 From Tamarind Balls To Exotic Beverages.

AFTER becoming a single parent nine years ago, Shondel Abiola Alexander felt she had to do something extraordinary to take care of herself, her children and the mounting bills. She had a nine-to-five job at the time; however, that salary was not enough to make ends meet.

She started out by making tamarind balls, plantain chips, sugar cakes (tablets) and jams and jellies. She also sold ice lollies to schoolchildren. Sometime later, she moved into the beverage side of things, not realizing it would have become such a big business as it is today. The move to producing beverages, she admitted, was accidental.

“It all started when a friend who was planning a birthday party told me that she did not have enough money to buy drinks,” Alexander said. “She asked me whether I knew anyone who made peanut punch. When I told her I could do it, she accepted my offer. The punch became an instant success at the party, with many of the partygoers hiring me afterwards to make their punches whenever they hosted events.”

At the time, Alexander had no name for her business. However, she knew she had to come up with one quickly, especially since orders for her beverages went from being a few bottles to a few cases. Halfheartedly, she decided to name the business after her middle name.

“I hated my middle name ‘Abiola’, so I decided to use the shortened version of it as my business’ name so that I could start loving it,” she cheerfully admitted.

Alexander’s company, Abby’s Exotic Blends, is based in Monchy and now delivers island-wide. Her line of exquisite punches includes flavours such as sea moss, banana, rum (Red Romance), coconut and peanut. The company also specializes in fruit juices for children as well as plantain chips.

Abby’s products are available at all branches of M&C Stores, North South Enterprises Ltd., Jn. Marie & Sons Ltd. and a number of other locations.

After nearly a decade in business, Alexander said she remains proud of her company’s successes. However, she is still working on improving her branding so as to have a greater appeal on customers’ tastes. Visual impact, she said, is also a crucial factor.

“The challenges currently being faced by the business includes packaging. It’s a huge problem for me, resulting in me not being able to target any large external market as yet. Nevertheless, the Ministry of Agriculture is working with me to sort that out,” Alexander explained.

Despite the setbacks, Alexander said she has never regretted starting her business. In many ways, she added, the business has helped to broaden her thinking and improve her mannerisms. She advises anyone with a dream to follow through with hard work to achieve their goals.

“Everything about me has become different. It has also helped a great deal with my children and who they have become,” the businesswoman said.

Alexander was a participant in this year’s Saint Lucia-Taiwan Partnership Trade Exhibition. It was her fourth showing at the exhibition that aims to foster deeper trade ties between Taiwan and Saint Lucia as well as showcase products from both nations. Thus far, she said, there have been positive signs for her business.

For now, Abby’s products are being exported to Martinique and Barbados on a small scale because the company is presently unable to manufacture enough products to suit large markets. Alexander said she’s hoping to change that soon.

Orders for Abby’s products can be made by calling 486 6179 or 519 1669. While the beverages are all alcohol-based, alcohol-free concoctions can be made available upon request.