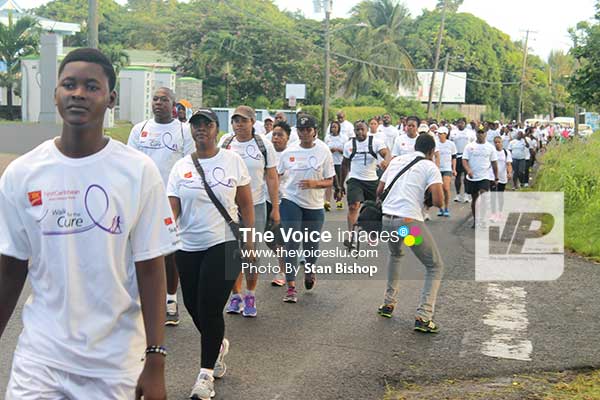 CLOSE to 400 people turned up last Sunday morning for the 5th annual CIBC FirstCaribbean Walk for the Cure which was held simultaneously in the north and south of the island.

About 250 walkers participated in the northern leg of the event which began at the bank’s Rodney Bay branch with walkers making their way through Monchy, exiting the La Retraite Road, continuing along the Gros Islet Highway and crossing the finish line at Pigeon Island.

In Vieux Fort, 140 people started the early morning trek from the George Odlum National Stadium, passed through La Ressource and made the round towards the Vieux Fort/Laborie Highway and finishing at CIBC FirstCaribbean’s Vieux Fort Branch.

Walk Manager, Tia Henry, said the fundraising walk is held in all territories where CIBC FirstCaribbean operates. All funds raised go towards associations that help in the fight against cancer, including creating increased awareness about the disease. Proceeds from Sunday’s walk will go to the St. Lucia Cancer Society and Faces of Cancer St. Lucia.

Henry said this year’s registration numbers in both legs of the walk exceeded the 200 minimum organizers were hoping to attract and organizers have deemed the initiative a success. Nevertheless, they hope that the numbers continue to grow allowed the event to make a more substantial impact.

“The annual walk is very important to us, especially as part of our corporate social responsibility,” Henry told The VOICE on Sunday. “As we all know, every one of us knows someone who is battling the disease. So it’s very important that we are able to contribute to making such a huge donation to this event.”

Regionally, over US$400,000 was raised last year. But organizers raised the stakes this year by setting US$500,000 as the target figure. In the Saint Lucia leg of the walk last year, EC$50,000 was raised and subsequently donated to the St. Lucia Cancer Society and Faces of Cancer.

Henry said the bank was hoping that this year’s target figure for the Saint Lucia leg of the walk — EC$75,000 – would be realized. With the bank’s fundraising activities ending on October 31, she said that realization seems possible. Nevertheless, she encourages Saint Lucians to continue supporting the cause by making their donations to the CIBC FirstCaribbean Bank account # 106995550. The drive, she said, is not only financial but personal.

“Many of our employees participate in the annual walk because we, too, have had relatives who died from 3cancer. We’ve also lost staff members to the disease. As recently as last year, we lost a staff member from our Vieux Fort branch,” Henry explained.

After the walk culminated at Pigeon Island, participants were treated to light refreshments and a soca-fit workout session. Medals, trophies and prizes were also presented to participants who finished in the top places in the following categories.

Julian Toussaint, who won in the adult male category for the Gros Islet walk, says he has been supporting the ‘Walk for the Cure’ for some years now. He was among the few men who participated in the walk but said the cause is more important than many people would care to admit.

“I think it’s important to come out and show support for such a cause. We have this disease right on our doorsteps and we need to be aware of that. I’m not aware of anyone in my family having cancer but I definitely support the cause,” Toussaint told The VOICE.

Toussaint has twice won the ‘Men in Heels’ obstacle challenge which forms part of the Yoplait Walk for Cancer. This year, he hopes to score a three-peat. He believes that creating awareness about the dreaded disease should be a year-round regimen and says he remains committed to doing his part to help in that regard.