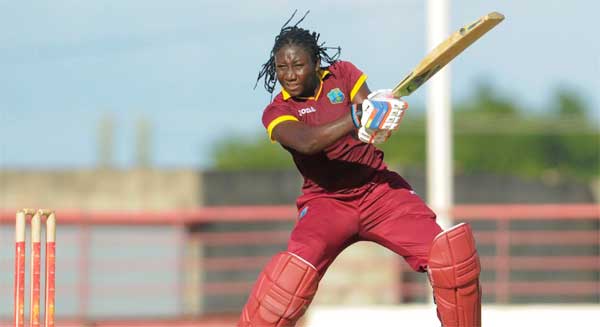 Seemingly heading for defeat with England cruising at 133 for one in the 29th over in pursuit of 224 for victory at Sabina Park, the hosts snapped up the last nine wickets for just 48 runs to send the visitors reeling for 181 all out off 44.2 overs.

Taylor finished with three for 22 from her 10 overs while fellow off-spinner Hayley Matthews picked up two for 25.

England Women were given a great start to their run chase by Tammy Beaumont who struck a top score of 57 off 64 balls, in a 95-run opening stand with Lauren Winfield whose 51 came from 74 balls.

But Taylor accounted for Beaumont after the right-hander had struck eight fours and a six, caught and bowled in the 20th over and Winfield, who counted five fours in her knock, followed in the 29th over when she was run out after putting on a further 38 with captain Heather Knight who made 37.

Taylor then delivered a huge blow when she had Knight caught and bowled with three runs added in the following over to leave England Women on 137 for three.

Earlier, the irrepressible Taylor had top-scored with a superb 84 as West Indies Women rallied to 223 for six off their 50 overs, after opting to bat first.

The right-handed Taylor notched her 25th ODI half-century as she anchored key stands throughout the innings before finally departing in the 48th over.

Opener ShaquanaQuintyne found form with 41 off 72 deliveries with two fours and a six while former captain Merissa Aguilleira chipped in with a busy 32 off 33 deliveries, which included four fours.

Taylor arrived in the fourth over after Matthews departed for eight at 12 for one, and added 69 for the second wicket with Quintyne, 36 for the third wicket with DeandraDottin (18), 45 for the fourth wicket with Aguilleira before dominating a 31-run, fifth wicket stand with Britney Cooper (9).

All told, the 25-year-old Taylor faced 129 balls and struck six fours and two sixes before she was dismissed at the death with West Indies Women searching for much needed runs.The fifth and deciding ODI bowls off tomorrow at the same venue.