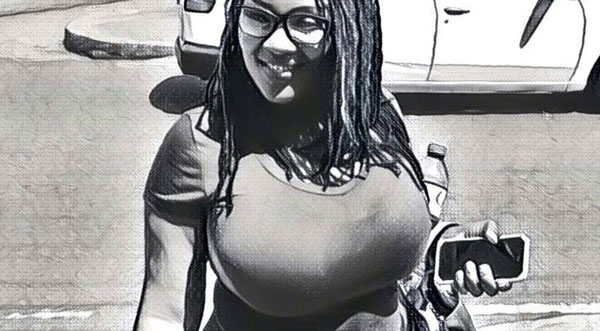 I’M starting today’s FITC with a disclaimer: Please don’t read if you are prudish!

With that said, today’s subject has won the crown for being my funniest and most candid interview to date, and honestly, I expected nothing else when I approached her.

Justin-Anne Aurelien, who is better known as Justine, Kazia or Gros Tortorts (you’ll soon understand the nickname) is a 32 year old Balata resident who is currently pursuing a Bachelor’s Degree in Mass Communication in Trinidad.

Aurelien is this full of life and laughter character that most people would call crazy, because she is very opinionated, dares to say what others are too scared to say.

But apart from her pretty face, her outspoken ways and her contagious sense of humour, she has one other feature that definitely makes her stand out in more ways than one.

Just to give a hint, we’re talking breasts, but…I’ll leave the rest for her to explain. 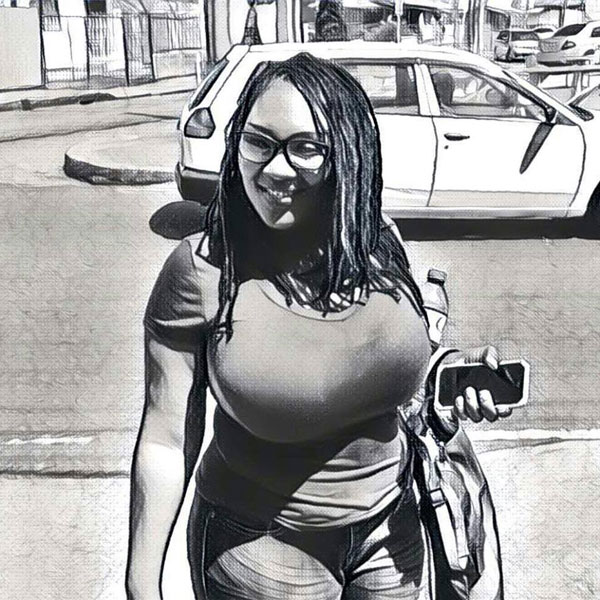 The VOICE: You undoubtedly stand out in a crowd because you are incredibly beautiful and vibrant, BUT you also have some, um, sizable breasts. How do you personally feel about your assets?

Justine: I hated having big breasts for most of my life. It made me feel awkward in primary school. Everyone else was still playing Chinese skip and I was on the side eating an icicle in a rage. I hated bras, they were so restricting. I got them from my father’s side…literally all the women have huge breasts over there. I remember the first woman who made me feel better about my breasts, Joan Bogle, a family friend from London. She had visited and gave me four bras that were just my size. She was me in adult form…personality and body as well. She was able to speak to me in a language many couldn’t. She helped me understand that I would grow into them, and that I would be a beautiful woman who would be known not just for my looks but my intelligence. She said I was overly blessed…that was good enough for my ego. I’ve grown to love my breasts. Buying bras is a hell of an experience though…they fit sometimes, they spill over or they go lopsided. I just want to go braless sometimes but my nipples will start having conversations with my navel about how I live life and I’m not going to have that, so I wear them as high as possible. But once the day is done I set them free. Let them chill under my chin or under my arm for a while. I’ve accepted who they are and wherever they choose to fall. I get hassled on the road daily. Sometimes it’s a nuisance but I’m reminded everyday that I am extremely blessed and I smile

The VOICE: How old were you when you first noticed that they were growing bigger than most girls of your age, and how did you feel about what was going on?

Justine: I was about eight years old when they first popped…just like that! I couldn’t play ‘Mummy and Daddy’ again and my dreams of being a housewife of Ti Kaye was over. My mother started being more protective, buying me training bras and vests. By 11 I was being bullied in primary school because of a rumour going around that I made crayfish bite my breasts! Like who comes up with those stories? They were just jealous of me. It was so bad that I begged mother to be transferred. I wasn’t ready to grow up and be one with the under wire. I loved playing volleyball and cricket but they would hurt as I moved around. Even at Corinth Secondary, I struggled. I joined the modern dancers group to help me adjust and feel better about my body. I hated Thursdays a.k.a sports day. Wearing my PE uniform revealed everything and I felt weird. My breasts made me shy, so I found a way to distract myself and others whom I thought were always staring me. I began to write and be more vocal. Pretty soon I was vice president of the Student Council, Environmental Club, Dukers, French Club, Spanish Club and was a hell of a debater. Soon I was opening assemblies and hosted the national independence school rally with my prefect Susan Clovis. I’d found a way to stand out without the fear.

The VOICE: Breasts are seen as the ultimate feminine feature. They have the power to nurture babies, empower women and drive men insane with lust; however, what do they mean to you?

Justine: Wooooooye! You make them sound like they’ve graduated from Harvard and received Nobel Prizes. To me they are the defining factor of how much sleep I get or what I can wear. Real ting! I’m just here trying to understand how to make them stay up in a barrel dress. Honestly, I never understood how breasts help define feminity until I saw women who had lost their breasts through cancer, yet go on to live amazing and beautiful lives despite not having breasts. Notice I said “helped define” and not just define. These women, I’m sure struggled to adjust, but they were no less women than any of us. Still had families to take care of, causes to fight for, reasons to live and men who loved them even more in the absence of this feminine feature that drive men insane with lust. My breasts are a huge part of me…see what I did there? (laughs) They contribute to my art, they help me reach out to other women, they help me understand men, motherhood, how my body works and life.

The VOICE: They say when you don’t know, you just don’t know, and in your case, men (for obvious reasons) and women who are not as endowed as you will never understand the struggles of having big breasts. Please enlighten us about these struggles

Justine: Let me tell you! I couldn’t bend over to write at my desk at school. I constantly complained about back aches to my mother who would rub my back for me. Get me new bras but they kept growing. I had to wear a tight sports bra to keep them in place so I wouldn’t feel that. I still do it today. I remember walking through town once and a guy said to me “I’m so thirsty give me a cup my girl” and made that awful sound when you dive your face into skin and roll your lips. I was so disgusted. Another one asked, “all that your grandmother leave for you in the will?” It gets worse, “I will marry you and you will be my breakfast every morning!” I can deal with the “Hey Empress”, “Bountiful Sistren” and “Wham Beautiful?” on any day but the sexual connotations get to me every time. I could never get used to it.

The VOICE: Cheeky Question…Most women don’t know the actual size of theirs because they have never had them properly measured…did you, and if yes, care to reveal the size?

Justine: Girl what’s that properly measured thing you speak of? Is that a myth? You know I was a bit embarrassed to go into stores as a young woman to buy bras? I would go in, gauge the size, compare to mine and buy it. The store attendant would ask me if I was sure that was my size. I was adamant: “Yessss! Aa!” When I got home, the bra was not tacking, tortorts overflowing “Spill on isle 5”. Or the Bra was too big, not enough support…Drama and more drama. I’ve owned more bras that didn’t fit comfortably than bras that did. I only learned my actual bra size in 2010. The mother of my then boyfriend helped me size my breasts because we were similar in breast size. I was so happy. I ordered 8 bras one time. I’m a confident 40DD but I sometimes wear a 38DD or even a 42DD depending on the make of the bra. But 40DD is where I’m most comfortable…Christmas is coming. Please and thanks!

The VOICE: To the millions of women either wishing decrease on what they have naturally or get implants to make theirs bigger, what would you say to them as a woman who lives with them everyday?

Justine: Well, well, well! Who would ever think I’d be the reasoning voice for breasts? The Tortort Whisperer! But listen, if you want to make them bigger, I’ve always thought that’s asking for unwanted drama. Some women get addicted to the size and keep increasing it. There are ways you can naturally enhance their form…look into that first. To the women who like me who live with big breasts, I say keep rocking it. I know of women who have done the surgery, not just to look better but because of health issues. If you are beautifully and wonderfully made with big breasts, you will have challenges but it’s about knowing what to wear, how to dress, which bra to wear with what. If I get the chance to restore mine to their former place of higher glory, I definitely would! I’ve never been told I was fat or that they were ugly…quite the opposite actually. My issues are with how I see myself. I see you confidently pulling off amazing fashion looks that smaller women just look plain and pretty in. We are the reason dress makers created low neck lines…not to see chests but to see breasts! Don’t let anyone tell you otherwise! Breast is best! 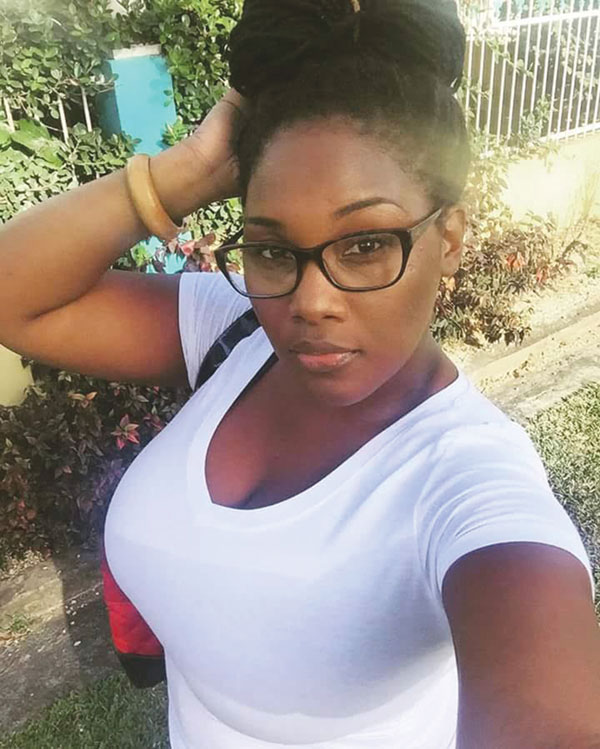