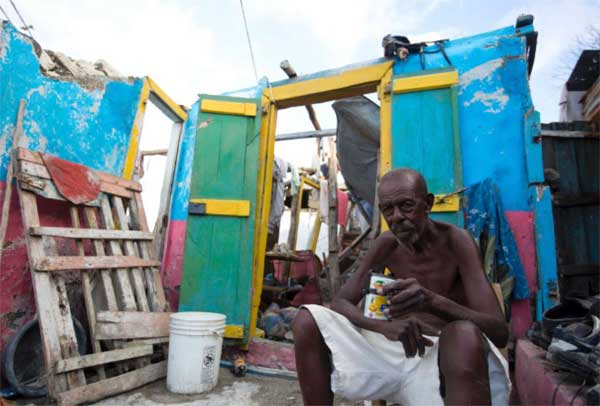 DO you St. Lucians realise just how incredibly blessed we are?

We were all braced for the impact from Tropical Storm Matthew week before last…Tropical STORM. And after this weather system passed, one can only look up to the skies and say Thank You Lord, because whilst some lives were impacted, our little gem of an island escaped fairly unscathed.

But then, look what happened to the Bahamas, and worst still Haiti…an already destroyed nation that has not been able to catch a break to recover from hit after hit from Mother Nature’s wrath.

As if angry that we dodged its mayhem, Matthew powered up to a category four hurricane, making it one of the fiercest weather systems to hit the Caribbean in nearly 10 years, and like an angry bully, passed its rage out on the little guy, namely Haiti.

And if you thought that was all, even as the island’s death toll has hit the 1000 mark, thousands of lives are left in further peril as survivors are left to pick up the pieces with the looming threat of cholera due to contaminated water and lack of hygiene systems hanging over them.

Now this is where I am asking you my fellow St. Lucians to step up.

We are not the richest island in the Caribbean…not by far, but at the end of the day, we are not Haiti.

The queues at the supermarkets in the days leading up to the storm was enough evidence to prove that we are doing OK.

So people, and this is coming straight from the heart, please do what you can to help our brothers and sisters in the north.

There is no question surrounding whether they are receiving aid already…that is a no brainer…but looking at the extent of the obliteration of the island, they need all the help they can get in the world. And with us being a sister island…a fellow patois speaking island even, we should have no excuse or objection towards doing all that weyou can.

As I write, my heart aches…it aches so badly as I can see the images of the dead children lined up to be buried in mass graves. My eyes are filled and my fingers are shaking.

This is what is currently going on…so whilst families are already in a state of shock, loss and grief, they cannot even take the time to accept and mourn their losses as the bodies have to be buried in bulk and as quickly as possible to prevent the spread of even more disease.

My Lucian brothers and sisters, I know you all, we are one and I know our strengths as well as I know our weaknesses.

Whilst I will bend my head in embarrassment and say that locals are infamous for numerous things, there are numerous traits that make me proud to go anywhere in this world, hold my head high and my hand on my heart, and shout at the top of my voice that I am a St. Lucian!

One of those traits is that we come together and put all animosity and negativity aside in times of need…you people are just beautifully big hearted like that!

And so I am asking, no, I am begging that this trait is triggered and that we come together for this seemingly forsaken island.

Let’s form groups or liaise with organisations like the Red Cross and let’s help these people out…they really have suffered enough.

Perhaps we could go a few steps further and open our doors to some families…IF and Only IF we can afford to, and of course, temporarily, until the situation in their homeland is improved

I’m beyond certain that there are hundreds, if not thousands of children in need of adoption…perhaps you were considering adopting a child…here is the perfect opportunity.

We are, or should be our brothers’ keepers and we should really put that to practise.

Now it is no secret that many people have reservations about the island and the fact that they practise voodoo…I am hoping that these reservations are put aside and that we recognise that there are PEOPLE in need…regardless of what religion they follow.

If this is difficult to do, think about the children…the innocent children. Yes I know that people usually use children to tug at heart strings but honestly, hundreds have already lost their lives, let’s do what we can to save the lives of the ones who remain.

Whilst I doubt that I have to give a list of things needed, I will still give a short one:

. Non Perishable foods
. Bottled Water
. Medicine and medical kits/equipment
. Clothes and shoes
. Toiletries and hygiene products
. Toys for the little ones
. Blankets and pillows…even bedding if you can afford
. Building products and tools…I don’t think I need to stress the importance of these.
. Batteries and small electrical items like radios and torch lights

Trust me when I say that the list is far longer, and if you are really interested, you can contact the likes of NEMO and the Red Cross, to name a couple of reputable organisations, so that they could give you further information.

We have our own issues right here at home, that I know, but considering the evidence when we compare St. Lucia to Haiti, priorities should be considered.

As I scroll through social media, I have noticed that many people have shown solidarity by changing or altering their profile pictures to show that they are thinking about and praying for Haiti in their time of need…Let’s do a little more than think about and pray for them over there…step up and take action. God alone knows they need it!