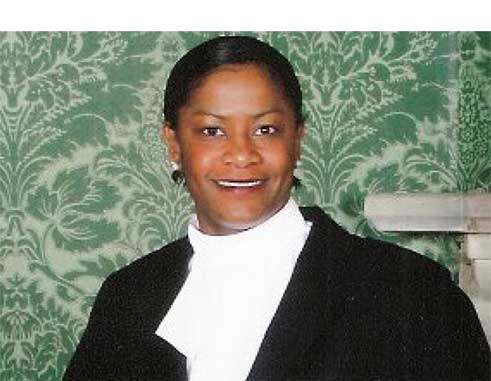 IT’S funny how things, especially important ones have a tendency to work themselves out and just seemingly fall into place.

Now anyone who follows politics in St. Lucia will know this individual with the mere mentioning of her name…Leonne Theodore- John, but just in case you don’t she is the current Speaker of the House of Assembly.

It was following a day dealing with Murphy’s law, where everything seemed to be going frustratingly wrong, that I visited a cousin who owned a hair salon so that I could blow off steam.

Upon arrival, there was only one more client getting beautified and it just happened to be Theodore – John.

It was actually during one of our conversations that she mentioned the fact that she had a lumpectomy that my journalistic instincts kicked in and I cheekily asked her to allow me to tell her story…seeing that we are in the month of Breast Cancer observance.

The VOICE: Let’s go back to the beginning. Tell me about the when, where and how of your experience with a lump in your breast.

Leonne: Strangely enough, I’m one of those because I have a first cousin who had breast cancer, so from 11 years ago I became very conscious of it, and plus I had a half sister who actually died of breast cancer in 2009. So I’m cautious, always lifting my arms in the bathroom and doing the normal checks, I’d go to my doctor and all of that. I was basically concerned about a problem I had with my hip from back in February 2014, I had done everything that I could and the decision was made to go to Florida to have it checked out. So I made an appointment to see and orthopaedic surgeon and I decided to see my Gynaecologist since I had a couple of days to spare after my initial appointment.

I went to the Gynaecologist, did my examination and everything was fine, except he said: “Hey Leonne, the last time you had a mammogram was four years ago, so it is time that you did another one”. So since I was supposed to have been in Florida for a short period, they got me an appointment at the Women’s Diagnostic Centre, not far away, for the same afternoon. So I went in with my two girlfriends from church and sitting in the waiting room, something caught my attention. There was this new testing for persons with dense breast tissue. Now I could not appreciate what that meant but I figured, since I have big breasts, I might as well, and if it is new to Florida, you can only imagine how long it would take to reach St. Lucia. So I said I’m here already, let me pay the extra $60 to get it done.

So I went in and apart from the normal mammogram, they were doing a deep tissue mammogram for me. They were very thorough and they told me that I indeed have very dense tissue and so they wanted to be very careful and took me in for the resident doctor to examine me. It took a long time, they were under my arm pits, the lymph nodes, but it was so conspicuous when they got to the left breast because you just saw that thing on the screen. But they were so professional and calm about it, but I still knew that there was something. So at that time, my heart was throbbing and racing. The doctor came in and told me that I had a lump and it needed to be dealt with. I started to shake and my teeth were literally chattering…I just broke into a shiver. They tried to calm me down but I just couldn’t deal with it because I came up to deal with a hip issue and now I’m facing a lump in my left breast.

They had to cover me up with two blankets and the doctor said: “there is nothing to worry about…it is early and there is just one lump, but you’re in good hands. You’re in the right place so I recommend that you come in on Monday to have it removed.”

I walked out and my friends were just staring at me. Amazingly, one of them had the same procedure six months earlier. So she’s looking at me and the look on my face, she just knew. The other one was quite innocent.

I just fell at their feet and cried and wept bitterly. The fear…it is all that’s rushing through your head. They warned me and told me to stay away from the internet and don’t bombard myself with information…I’m in the right place, the people there are professionals and they will sort me out…the internet will just send me crazy. So I took it in stride and as a Christian, my faith kept me. I cried and prayed, but the anxiety!!!

On the Monday, I had an appointment with another doctor because they had looked at my spine and said that I needed an MRI etc. I did that, and then I came back down to do my surgery. I went in, they prepared me and tried to relax me but you know…

They informed me that they were going to put this needle in. They explained everything that they would go into the lump and it would be on the screen so you could see what was going on, and when the needle hit the lump, they would extract as much as possible through this huge tube. As she was pulling, she told me that she was hoping to get a light colour as light colours mean good news. When it came out, the colour was light and although she didn’t want to give me false hope, she was optimistic. Also, they managed to pull out 90% of the lump itself.

I went home afterwards and the waiting game started…all I could do was pray. Whilst waiting, I got the news that I needed immediate spine surgery because I had a prolapsed disc with shattered piece in my spine. That was from a fall I had in the UK 10 years before. And by then I had already lost 30% of my muscle power in my left leg and then it was difficult to walk, so I was using a walking stick.

We got the results of the lumpectomy on Tuesday morning because my nurse said she would not wait for Wednesday to give me the good news and it was good news. Everything was all clear and all they required was for me to return in six months time, which I did. Everything was looking good and after another mammogram, everything was all clear. It was painful but I was willing to go through the pain to know that I am ok.

So I’m happy to report that I went back in February 2016 for my second check up and I got the all clear and was told that I do not need to report in until a year’s time.

What did I learn? I am grateful because had I done a normal mammogram, it would not have picked up that lump and I’m hoping that we could have these facilities for our women, but I want it to be available for all, not just a few who can afford. This is so important in women’s health and in our small society; there are too many cancer cases. I would also like to ask women to check themselves and make use of all the organisations in St. Lucia that are there to help. This is your health and life and there is nothing to be ashamed of…precaution is better than cure.

The VOICE: You are a mother of a five year old currently…your only child. What went through your head when they told you that you had a lump?

Leonne: (begins to cry) I remembered what I went through with a sister. The day before she died, I spent the entire day with her lying on her bed and just looking at what cancer can do. Going down to St. Judes and using glycerine to clean her tongue and throat, crushing ice to put on her tongue…I’ve seen what cancer can do, and what cancer has done. I have a sister who is a survivor of 11 years but the scar of what it looks like…I thank God she’s alive, but that is not a pretty sight at all, because with her, she had a radical mastectomy…it is not a pretty sight.