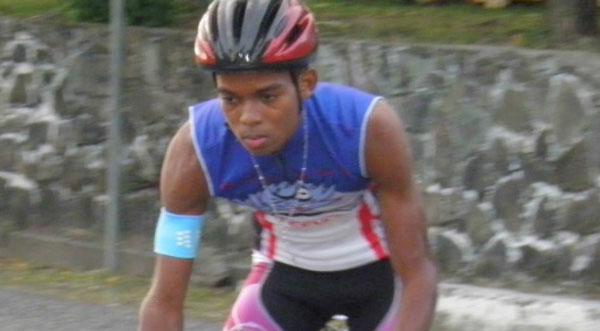 After a heavy downpour that delayed the start of the 14 and under event in which there were six participants competing over 10 laps/8km, Joshua Prince of Dennery Valley and Quami Robinson of Mon Repos made light work of the other four competitors as they quickly took the lead up until the finish.

First across the line was Prince in a time of 15 minutes and 47 seconds. Close on his heels were Robinson in 15 minutes and 54 seconds and Ken Eugene of Excellers in a time of 16 minutes and 12 seconds.
As soon as the 40km open event started, Richards and national champion Antonius Jn. Baptiste crashed on the first lap. The two were back in action quickly as the rest the bunch rode a high tempo for the first 10 laps with Richards and Jn Baptiste in pursuit.

Jessie Mentor, juvenile cyclist from Mon Repos, was aggressive with a series of attacks; so, too, were junior cyclists Donald Joseph of Dennery, Andrew Norbert of Mon Repos, along with the experienced Winston Williams of Excellers.

Richards managed to get away from the main bunch on a few occasions but Mentor, Kenneth Mathurin and Joseph would not allow it. However, with less than four laps to go, Jordan got away again.

The bunch was within striking distance of Richards with two laps to go when Jn Baptiste and Mathurin in hot pursuit crashed in a corner as they tried to avoid a rider who was being lapped, taking them out of contention.

With one lap to go, it was Williams going down and Mentor going off the road as Jordan held them off to victory despite a late surge from Andrew Norbert of Mon Repos coming in second place.