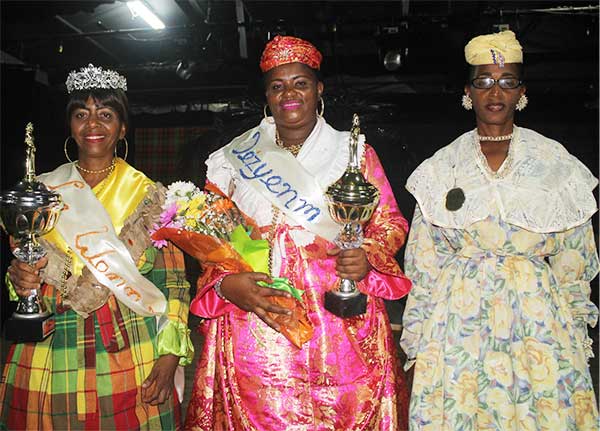 ANGELA Simon of Jacmel was consistently impressive in all categories at last Friday evening’s LawennKweyol Pageant held at the National Cultural Centre (NCC). In the end, she amassed 633 points to win the title, edging out second-placer, Sheena Cherubin of Monchy by 82 points.

All of the contestants gave impressive accounts of themselves, with some falling short in certain categories. But Simon’s performance gave her the edge from the beginning – during the ambassadorial speech-where contestants describe themselves and the inherent pluses of their communities. She struck a positive note with the audience.

It was Simon’s first time participating in the pageant and she told The VOICE she decided to take up the challenge after being recommended by her community’s organizing committee for this year’s JounenKwéyòl. Jacmel is one of the four communities hosting the event this Sunday.

Lucita Ferdinand of Castries placed third with 543 points. It was her second consecutive year participating in the competition where she also placed third.

This year’s event was also able to attract increased sponsorship and all contestants received attractive prizes that ranged from spa treatments to cell phones to cash and cash vouchers.

Additional entertainment on the night was provided by the East Coast Folk Band, Helen Folk Dancers and the Vide Bouteille Primary Drummers.