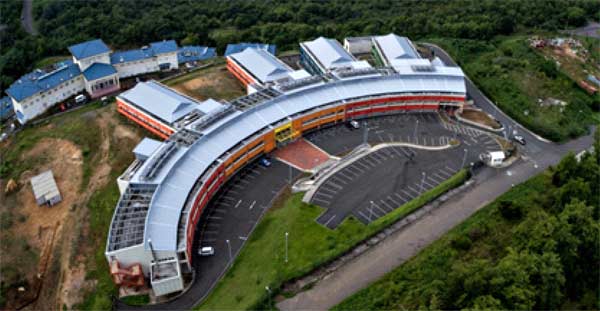 Henriette Geiger, the European Union’s Head of Unit for Development Coordination for Latin America and the Caribbean, accompanied by other officials from the EU Delegation, visited the Owen King-EU Hospital for a status update of the readiness of the hospital for eventual opening.

The EU Officials were received by the commissioning team for the new hospital, senior managers of the Victoria Hospital and staff of the National Authorizing Office (NAO) attached to the Ministry of Economic Development.

Deputy National Authorizing Officer, Aviva St. Clair, explained that the NAO’s Office acts as a bridge to facilitate dialogue between the Government of St. Lucia and the European Union and to ensure all engagements and transactions follow EU rules and regulations.

“This project has been one of the most substantial projects that the European Union has ever done in this part of the world and we’re very happy with the progress of it,” St. Clair said. “We’re drawing the close at this point. We’ve installed all the equipment and we are just doing the final activities to ensure that the building is fully equipped and we stand ready to support the Ministry of Health in the process of commissioning the hospital and making it available to patients.”

The Owen King-EU Hospital is a longstanding project of the EU which they hope could be brought to conclusion very soon. The EU delegation had earlier on Wednesday this week met with Prime Minister Allen Chastanet who outlined the government’s vision and direction for healthcare in St. Lucia in relation to the new hospital.

“For him it is key to find a sustainable solution to run the healthcare in the country (and) the hospital is only one part of it. So we were looking at health insurance possibilities for all St. Lucians and for us the European Union it’s key to find a sustainable operating modality for the hospital because a lot of the investment of the European taxpayers has been invested here and I have to say that the hospital I see today is the nicest hospital I have ever seen. So from a design point of view and a technical point of view, infrastructure point of view — not even talking about the view that cannot be paid by anything — it’s priceless. I have to say it is a first-rate facility and what we want to do is bring it into operation as soon as possible so all of St. Lucia can benefit from it,” Geiger said.

Geiger added that though the EU is eager to hand over the facility as early as possible, the EU is also cognizant of the high cost of running and maintaining the facility and prepared to stand by the Government of St. Lucia to bring this project to full realization.