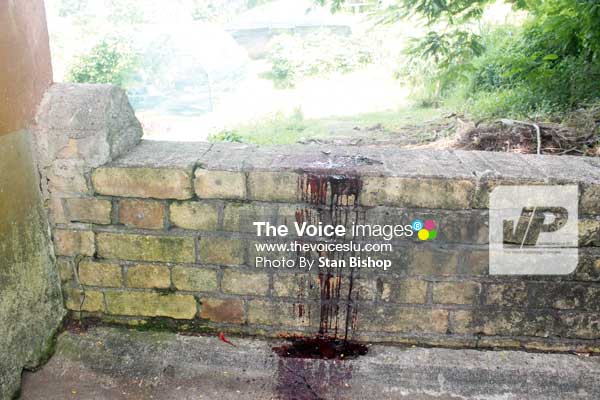 JUST over a month after thieves slipped through the rear section of St. Mary’s College and assaulted and robbed a few of the students in broad daylight, the school has been targeted again, this time during the night.

School Principal, Rowan Seon, said the thieves struck around 10:00 p.m. on Monday, seemingly mimicking the modus operandi used at other schools burglarized recently, including attacking the security guards on duty.

“The watchmen were seated in a room chatting as they normally would on evenings,” Seon said on Tuesday. “They (the thieves) entered the room and attacked them mercilessly to the point where they were battered all over their heads, tied up and then left virtually semi-conscious and semi-comatose.”

Seon said the four thieves then smashed the door to his office in their quest for loot, making off with only small items “because they didn’t seem to interfere with the bigger stuff that was there.”

“They turned the room upside down — and that’s no overstatement – looking for these items. After having ransacked that room, they went on to the counsellor’s office and did the similar thing there, as well as the staff room upstairs. They then directed their attention to the bursar’s office, which has reinforced heavy grade steel, with which they would have had much difficultly,” the principal said.

Seon said that after hearing the noises from the blows the thieves made to the doors, a man who was nearby came to the school and noticed the security guard tied up at the gate and immediately called the police, who responded to the scene while the thieves were still on the compound. However, the thieves managed to escape despite police reportedly firing a volley of shots in their direction.

“One of the security guards has been discharged from hospital but the other remains there because he suffered more severe head trauma and other injuries, which are not life-threatening. But it certainly threatens the hearts and goodwill of everyone who has knowledge of what went on,” a distraught Seon told the media.

Seon said one of the two watchmen on duty estimated that the thieves spent nearly 45 minutes during their rampage. However, Seon believed that had an alarm not been raised, the quartet might have spent hours there which would have given them enough time to dig into walls and remove steel bars to gain entry to other rooms. Despite the few material losses, Seon said other losses cannot be quantified.

“The number of items stolen may not have been significant cost-wise,” Seon explained. “But what (the burglary) has done is destabilized our school. We’ve already had another disruption due to the recent rains and other issues. So this is really not good enough.”

Seon added: “The whole education structure is being attacked by these hoodlums. We gather that this is about the fifth school that has been attacked in recent times. Obviously, this cannot continue.”

The principal of the all-boys school at Vigie said his students’ learning process has now been “set back” and that “teachers now have to look back over their shoulders while they’re at the blackboards teaching.”

“Nobody feels comfortable. We cannot have these characters hold an entire education system at ransom like that,” Seon lamented.

The latest break-in has heightened the principal’s concerns about safety at the school. Seon said something definitive needs to be done by authorities to remedy a situation that has been left to worsen for years.

“If it means having armed guards at schools, we may have to do that because we are past the stage of having watchmen with torchlights and transistor radios listening to music. Some of them have cellphones that have no credit, anyway, so they cannot make calls,” Seon posited.

Seon said people need to be mindful of the changing environment in which “heartless and merciless” criminals operate and that “we have to deal with them at the same level.”

“The education system is too important for us to have a handful of hoodlums terrorize people like this,” Seon stressed. “I think I have an agreement with the senior ministry people because they all seem to think that this is true: that something needs to be done at the drastic level.”

Classes were postponed on Tuesday as a result of the break-in to allow for police to conduct their investigations. However, all teachers reporter to school for a general meeting that day where several matters were discussed.

Also present at that meeting was Minister for Economic Development, Guy Joseph, who gave the principal and teachers the assurance that security at schools would be discussed thoroughly at a cabinet meeting scheduled later that day.

Seon said Archbishop Robert Rivas visited the school and the church should be assisting the school in whatever way it can.

The principal said classes would resume yesterday morning and students needing counselling as a result of the incident would receive such attention. Also, a special meeting for parents was scheduled for yesterday afternoon at which they would be given some reassurance that the matter of beefing up security was being treated as a priority.

Since the last incident, he said, discussions had been held with Digicel to install CCTV cameras at the school. However, due to the recent weather system, there were some delays and those cameras are now being installed.

Seon said that while security at school remains a crucial concern for all schools, any effort at beefing up security must take into account the school’s undulating terrain which makes it difficult to monitor the entire compound from any single point. Nevertheless, he said that security measures or not, a strong message needs to be sent to criminals who target schools.

“These people just walk through the city as though they’re normal citizens. We have to do something about this if we have a civilized society here. Everybody has to band together to do something to bring back our society to a level of civility where we can live comfortably,” Seon explained.