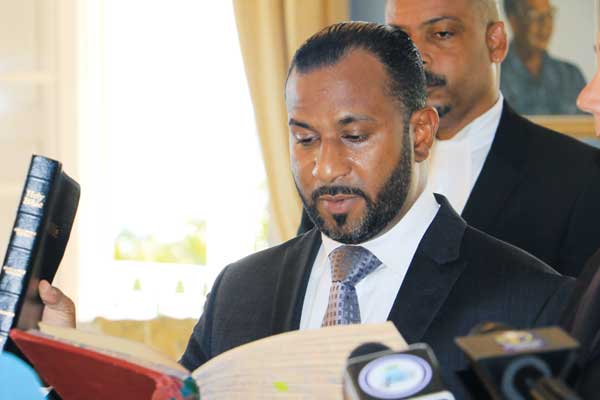 ATTORNEY at Law Daarsrean Greene was officially sworn in yesterday as the Director of Public Prosecutions for Saint Lucia.

A graduate of the University of Wolverhampton, Greene was called to the Bar in Saint Lucia in 1999 and has been in private practice since 2000. Following yesterday’s brief ceremony, he. said that he was humbled and honoured by the appointment.

“I will do my best to put things in place to take care of the outstanding matters facing the department,” stated Greene. “My priorities are the backlog of cases before the High Court of Justice. Also, as we know, there is public concern about what we call the extrajudicial killings. I aim from today to conduct full investigations into these matters in trying to bring some semblance of order and see how quickly we can get these matters out of the way.”

The DPP says he was grateful for the expressed commitment of the government to provide support to the Office of the DPP with additional human resources such as a special prosecutor if the need arises. Stating that the present staff at the DPP’s office were hard working and committed, Greene said he had confidence the team could achieve a lot. He added that once he completes his assessments he will make recommendations regarding additional staffing for the Office.